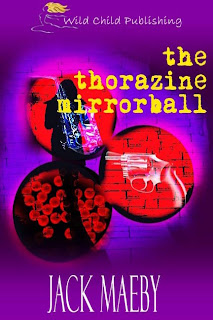 I've been busy trying to catch up with promised reviews - here's another that will hook you from page one - a superbly written mystery by Jack Maeby.
- Aaron

Well, at least not now. After two years of debilitating depression and forced exile in an asylum, characterized by chunks of memory loss and high doses of heavy meds, the twenty-one-year old rhythm and blues piano player is finally back.

Assigned a room in a halfway house in Albany in 1972, Jimmy reconnects with his old music buddies and lands a lucrative gig in the Adirondacks. All goes well, until a group of thugs nearly drive him off the road and people around him start dying, jeopardizing Jimmy’s already fragile mental state.

The young man, frazzled with nerves, is smitten by every pretty woman who crosses his path, particularly singer Yvonne Marshall, with her caramel skin and velvet voice. The woman oozes sex-appeal, creating a trail of shuddering men in her wake.

From one fast-paced scene to another, this book moves. Maeby also displays a deep musical insight, with perception that reflect his history as a band member with acts such as The Neville Brothers, Etta James, and Carly Simon, as well as his accomplishments and awards for his compositions in the film and musical fields. Yet within the action, there are also moments of poignant poetry couched in Maeby’s words.

“It was the opening movement of a dance done by demons, the prelude to panic, and then to darkness. If the feeling had sound, it would be an atonal moan in the bass register, accompanied by brittle, frenetic percussion. I knew it as the insistent, cruel pulse of anxiety.”

Jack Maeby has created a superb thriller in this taut and colorful novel. Characters jump from the page–such as Shorty, the irascible record shop owner who becomes inadvertently involved in a shady music business deal. Each of Maeby’s characters tremble with life; their natural dialogue is easy to swallow. The prose flows effortlessly, with none of the forced literary faux pas often made by first time novelists. There is no excess here, each word is precisely placed and potent. It is clear that in addition to his innate talent, this writer has done his homework.

The Thorazine Mirrorball is highly recommended for all lovers of mystery/suspense, music, or crime novels. The only question remaining is this: when will Mr. Maeby produce his next jewel?


***
Aaron Paul Lazar resides in Upstate New York with his wife, three daughters, two grandsons, mother-in-law, dog, and four cats. After writing in the early morning hours, he works as an electrophotographic engineer at Kodak, in Rochester, New York. Additional passions include vegetable, fruit, and flower gardening; preparing large family feasts; photographing his family, gardens, and the breathtakingly beautiful Genesee Valley; cross-country skiing across the rolling hills; playing a distinctly amateur level of piano, and spending “time” with the French Impressionists whenever possible. Although he adored raising his three delightful daughters, Mr. Lazar finds grandfathering his “two little buddies” to be one of the finest experiences of his life.

Double Forté is the founding book of the LeGarde Mystery series and was released in January, 2005. Upstaged followed in October, 2005. His third, Tremolo: cry of the loon, is scheduled for release via Twilight Times Books under the Paladin Timeless Imprint November 15, 2007. Mr. Lazar is currently working on his twelfth book, For Keeps. The first book of his paranormal mystery series, Moore Mysteries, will be released in May 2008, followed in June 2008 by Mazurka, the next book in the LeGarde mystery series. He is a regular columnist for FMAM (Futures Mystery Anthology Magazine), Mysteryfiction.net and has been published in Great Mystery and Suspense magazine and the Absolute Write Newsletter. Contact him at: aaron.lazar@yahoo.com, visit his blog at aaronlazar.blogspot.com, or stop by his websites at http://www.legardemysteries.com/ and http://www.mooremysteries.com/.
Posted by Aaron Paul Lazar at 1:34 PM