Last week I was hit with a sudden impulse to share a copy of the second Gus LeGarde book, entitled Upstaged. 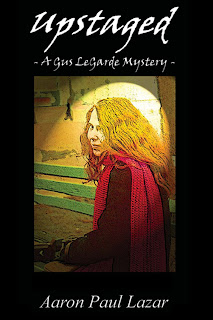 We've spoken a fair amount about Double Forte', the founding book in the series, and Tremolo, the newly released "flashback to the sixties" literary mystery in which Gus and his friends are children. But we rarely talk about Upstaged, the theatrical mystery where the local drama club gets to produce a musical Gus wrote in his college days, while they battle a psychotic saboteur who lurks backstage. It's a fun ride - and of course, the book features plenty of lush nature vignettes, family meals, and the usual LeGarde backdrops against the mounting tension of evil that plays behind the scenes.
That's a photoshopped image of my wife, Dale, on a park bench on the Boston Commons, probably right around 1969, when Gus "wrote" the musical. We were probably waiting for a Rolling Stones concert, I can't remember which event it was. Anyway, Gus's Musical, "Spirit Me Away," features a flower child who's lost in many senses of the word. I had to change Dale's hair color (it's dark auburn) to match the character, and photoshopped the background to look like a stage set. ;o) This whole idea of Gus's musical sparked another another book, tentatively entitled Portamento, which describes this part of Gus and Elsbeth's youth while they were in Boston at the conservatory.
Anyway, after an invigorating walk on a local dirt road on a crisp snowy day, I chose "Why I love winter" as the contest theme. There were no rules, no word limits, and no direction, other than the suggested subject. For those of you who dislike winter, I suggested you make something up! LOL.
We received numerous amazing entries - many of which may be read in my column at the Gather.com Saturday Writing Essential. Bob Evans (aka Elizabeth) wrote a lovely poem sharing her passion for nature and walks in the woods. Wilma M. remembered how much she loved snowstorm walks, especially at night. Trudy spoke with nostalgia, missing snowy winters since she moved to California, but reveling in the beauty of her current surroundings. I spoke of a winter gift by a friend of ready-to-bloom forsythia buds, and Debbie G. recalled her grandmother's forsthia with fondness.
Dale C., a Viet Nam veteran, told us how his take on snow and winter changed after he returned from the war, and amazed us with tales of snow creatures and castles he formed in his driveway, providing untold pleasures in the cold and giving neighbors and passersby unexpected delight. I truly loved his entry, as did many Gather folks.

Wiaka shared her passion for life and God with awareness of the miracle of the snowy blanket He provides to cover and nurture the spring flowers growing beneath. She told us that winter is her favorite time due to the purity of the snowy scenes that highlight the tenderness of God's love. This was a new angle - and it resonated with me.
Behind the scenes, I received more entries that were too large for posting to the comments section. Lorraine L. sent "Snow Falling in Baghdad," a touching piece about children across the globe and a young underprivileged child named Travonti. It was a heartwarming piece full of love and wonder.
Ravi Bedi, the accomplished painter and artist extraordinaire, sent a photo essay reminding us of the less privileged folks in his country and the hardships they bear with such courage. I loved his words and photos, and urge you to take a look.
Thank you all for the amazing outpouring of articles and memories. I loved each and every one, and for those of you who simply visited and commented, thank you for stopping by.
Now it's time to announce the winner. It was a hard decision, but I fell in love with this piece by Pat F., entitled, "Into the Woods." She's posted it here, but I have permission to reprint it below. 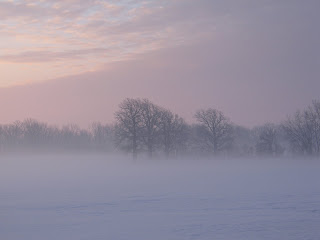 Into The Woods
by Patricia Fowler
The way a crow
Shook down on me
The dust of snow
From a hemlock tree
Has given my heart
A change of mood
And saved some part
Of a day I had rued.