Marta Stephens (author of Silenced Cry) inspired me yesterday to play a bit with flash fiction through inspiration, after I'd written yesterday's Saturday Writing Essential piece on haiku and imagery.
Funny, I guess June 14th was the day for inspiration all around. Well, it was flag day, wasn't it? Maybe there's something in that! I've posted my piece written in 15 minutes below - not very elegant or "edited," by any means, but it was fun.
I based it on the challenge by Donna Sundblad's Pumping Your Muse writing prompt blog to write about a crime that takes place while hiking. Take a look and stop by to try your hand at it!
*** 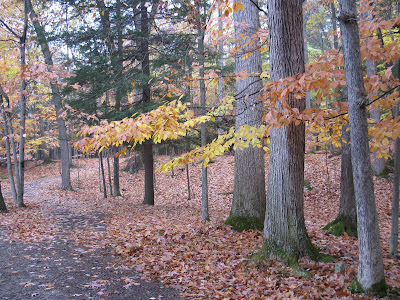 She saw it all in slow motion again, sitting there on the rocks high above the Letchworth Gorge. She saw the blood pool in the dirt on the trail and the calm hand that pulled the pocketknife out of her boyfriend's back.

The musty smell of wet leaves coated the inside of her mouth. She ran her tongue over her lips, noticing for the first time a warm salty wound where she'd bit through the skin. Somehow, it tasted good. And the distraction felt welcome.

This way, she wouldn't have to think about him. The way his dull brown eyes had dimmed and gone dark when she'd turned him over. She banged her fist against her head over and over again.
"Stupid! Stupid! Stupid!"

The attack had been unexpected, out of the blue. She turned her attention to the rock on which she perched, ready to fly into the abyss. Mica sparkled from its crevices. She picked at a large piece, dislodging it and looking at her spooky eye in the reflection.

She wanted to cry. She wanted to scream. But her brain clamped down on her so hard she had to squirm in place rather than give in.

Squinting at the crows that cackled overhead in the beech tree, she shouted up to them.
"Shut up!" They responded, and one flew in lazy circles, close to her.

She felt the panic rise again. Pictured Fred's eyes when he told her about Lucy. Pictured the calm red surf that had filled her heart and had made her reach for the knife, oh so slowly.

She stood, brushed her bloody hands on her jeans, and leapt from the cliffs to the glistening river water that curved in a metallic ribbon below.

***
Aaron Paul Lazar writes to soothe his soul. The author of LeGarde Mysteries and Moore Mysteries enjoys the Genesee Valley countryside in upstate New York, where his characters embrace life, play with their dogs and grandkids, grow sumptuous gardens, and chase bad guys. Visit his websites at http://www.legardemysteries.com/ and http://www.mooremysteries.com/ and watch for his upcoming release, MAZURKA, coming in 2008.
Posted by Aaron Paul Lazar at 9:32 AM