It's Memorial Day weekend, and first and foremost I want to thank every US serviceman or woman within earshot for supporting our country and for defending our freedom. Thank you, from the bottom of my heart.

If you happen to be passing a veteran selling red poppies today, buy a bunch and shake his or her hand. Thank him for your liberty, and for risking his life for us.

One of our liberties we enjoy in this good old USA is the freedom to choose what we read, and what we say. I thought perhaps I'd share a few new passions with you, from books to music.

Here's one of my new favorite authors: Joan Hall Hovey. I met her by happenstance via Twitter, downloaded and read one of her books, and fell madly in love with her style, characters, and settings. Joan lives with her husband and dog on the banks of the Kennebecasis River in New Brunswick, Canada. 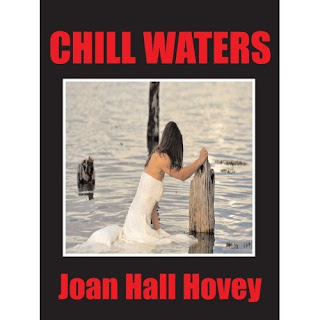 WHAT IF EVIL VISITED THE ONE PLACE WHERE YOU FEEL THE MOST SAFE?

Following the breakup of her marriage, Rachael retreats to the old beachhouse in Jenny's Cove, where she once lived with her grandmother. It is the one place where she had always felt safe and loved. Devasted and lost, Rachael longs for the simplicity of her childhood.

But Jenny’s Cove has changed. From the moment of Rachael’s arrival, a man watches. He has already killed, and mercilessly will do so again. Soon Rachael becomes a target for a vicious predator whose own dark and twisted past forms a deadly bond between them.

And sets her on a collision course with a crazed killer.

"...Joan Hall Hovey is a female Stephen King... a stunning, multi-layered, modern-day gothic, told with the unforgettable style and grace of a true master of suspense..." Rendezvous Magazine

Here's my mini-review: CHILL WATERS is a tightly written suspense by a supremely talented writer who brings her readers into intimate contact with a whirlwind story. Hovey's sense of place is outstanding, her characters live and breathe (right next to you!) and the suspense/action is phenomenal. I'm hooked, and plan to purchase more books by this writer. Kudos, to Joan Hovey. See more about the mind blowing plot and setting here.

I've just started reading another book by Hovey, entitled NIGHT CORRIDOR. This one promises to be just as good or better than the first!

Here's another book I just finished last night, by one my favorite authors.

Becka Johnson had been abandoned on the doorstep of a remote cabin in Chalcedony, Colorado when she was a baby. Now, thirty-seven years later, she has returned to Chalcedony to discover her identity, but she only finds more questions. Who has been looking for her all those years? Why are those same people interested in fellow newcomer Philip Hansen? Who is Philip, and why does her body sing in harmony with his? And what do either of them have to do with a shadow corporation that once operated a secret underground installation in the area?
"Brilliant!" —Suzanne Francis, author of the Song of the Arkafina series

I'm already a fan of Pat Bertram's books. I've read them all and loved them deeply. But LIGHT BRINGER was something completely new and surprising... surprising in its freshness, originality, its genre bending brilliance. Part thriller, part fantasy, part sci fi, part mystery...its plots were large and complex, encompassing themes that plague us every day; offering social and world commentary blended with weather trend observations (where ARE all those tornadoes and tsunamis coming from?) I do believe Bertram has defined a new genre, and it is a pure delight. Fresh. Original. Riveting. The characters are real and engaging. I particularly enjoyed the bit of romance between Luke and Jane - yes, another subplot. I couldn't put it down and extend my highest compliments to Ms. Bertram for her supremely smooth writing - there are no hiccups in this book.

Here's another. I met Susan through this blog and Marta Stephens, actually. I actually won a copy of Sin Creek, and now am hooked on her style and stories.

I flew through my read of Sin Creek - completely enamored with the lovely,  tight writing style of Susan Whitfield. Although the book opens with a tragic and tough-to-read about murder - definitely not for the faint of heart - it quickly morphs into a well-told, polished crime story. SBI agent Logan Hunter and her husband Chase are a great couple, of whom I grew very fond. The crimes at hand are horrific; the seedy underbelly of Logan's case involves porn, rape, and abuse. Awful subject, but with wonderful action, sharp and realistic dialogue, and great scene painting... a highly recommended read by a supremely talented writer.

In 1945, the semi-nude body of a woman is found in a two-bit Hollywood motel, a telephone cord wrapped around her throat; face frozen in a grimace of horror. The stolen car of a murdered motorist is parked in the motel parking lot, the owner lying broken and dead on the side of an Arizona highway. Al Roberts confesses and has spent the last 29 years in prison. Now, nearly three decades after meekly confessing, the aged Roberts swears his innocence. Jimmy O'Brien, defense attorney to the dregs of the criminal world, must find out why. Why did Roberts give a false confession? And why has he waited 29 years to tell the truth? O'Brien digs into the past, igniting a powder-keg that threatens to expose the long-held secrets behind Detour, the iconic Hollywood film documenting Roberts' story. Secrets that could destroy the underground aristocracy that has held power in Los Angeles, city of broken dreams, for years. Jimmy's ordeal takes him from the bleakness of Roberts' prison cell to the seedy streets of Hollywood, frantically searching to find out who took this DETOUR TO MURDER.
My very short review:

DETOUR TO MURDER is smoothly written and incredibly intriguing. I'm hooked on the Jimmy O'Brien series, and fell deeper in love with his cast of characters, particularly Rita and Sol. The feel of the time period is authentic, beautifully rooted in time and place. The story has enough twists and turns to keep you up at night, and Sherratt's talent weaving the tangled web is superb. I especially liked the empathy he evoked for the misunderstood accused prisoner, Al. Kudos, Mr. Sherratt! Now, on to the next book in the series!


***
And now, I'd like to leave you with one beautiful bit of music to listen to as you take off your proverbial hat, lay a hand against your chest, and thank our service men and women for their dedication and suffering. I know it's not a traditional red, white, and blue kind of piece, but it's subtle beauty and heart-wrenching sadness made me think of the troops and all they've sacrificed for us.


Thanks to Brenda Tremblay of WXXI FM radio in Rochester, New York, for playing this piece today as I drove to work. I'd heard it before, but hadn't memorized the composer. His name is Tomaso Albinoni and the piece is entitled Adagio in G Minor.