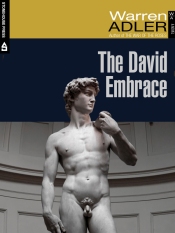 I love Warren Adler's books - I've read and totally enjoyed some of the "Fiona" series, recently read and delighted in FLANAGANS DOLLS, and have four books waiting in the wings to read.

This book - while engrossing and beautifully written in many sections - was quite different from the other books I've read. There were sections of inner dialog that might possibly have benefited by being punctuated with some action or live dialog, which we all know Mr. Adler does with great proficiency and class, but aside from this mild criticism, the book is well worth the read.

That said, there were plenty of masterful elements in THE DAVID EMBRACE. The panoramic lush scenery was totally captivating; the sense of place - superb.

You can read a super plot synopsis on Amazon, but here's a quick look:

In this fast-paced erotic thriller, John Champion, a professional hitman and Angela Ford, the wife of the man who orders the hit, engage in a passionate, overpowering and memorable love affair. Played out against the exotic locales of Florence, the Riviera, the French Alps and Manhattan, the two lovers endure impossible odds as their relationship deepens and matures. Figuring importantly in the story is Michelangelo's David, a majestic artistic masterpiece that stands in all its naked glory in the Galleria dell' Accademia in Florence and the epiphany experienced by Angela in its presence. In viewing this magnificent masterpiece Angela discovers the core of her female identity, one of the few illustrations of this phenomenon ever found in a novel which deals with the deeper implications of sexuality and how it can shed light on the eternal mystery of love and attraction between men and women.
Aunt Emma, Angela Ford's aunt, was one of the most delightful, passionate, and endearing characters I've ever grown to love, reminiscent of the "fountain lady" in UNDER THE TUSCAN SUN (I can't remember her name, but if you've seen the movie, you know who I mean!). Emma is full of life, unafraid to love, open to the world of pleasure, and the one who motivates Angela Ford to spread her wings and embrace love.

The character arcs of John Champion and Angela Ford grabbed me by the heartstrings and had me cheering all the way. The metamorphoses of both John and Angela were equally compelling, believable, and uplifting.

In addition, Mr. Adler brought to life Michelangelo's famous "David," a marble man who figuratively invades the mind and soul of Angela Ford in a cosmic and complete fashion, embodied by the humanity of John Champion and oddly enough linked to a long ago memory of her father.

THE DAVID EMBRACE is an interesting amalgam, and a fascinating read.


***
Aaron Paul Lazar writes to soothe his soul. The author of LeGarde Mysteries, Moore Mysteries, and Tall Pines Mysteries enjoys the Genesee Valley countryside in upstate New York, where his characters embrace life, play with their dogs and grandkids, grow sumptuous gardens, and chase bad guys. Visit his website at www.legardemysteries.com and watch for his upcoming Twilight Times Books releases, TERROR COMES KNOCKING (2011), FOR KEEPS (2012), FOR THE BIRDS(2011), ESSENTIALLY YOURS (2012), DON’T LET THE WIND CATCH YOU (2012), and the author’s preferred edition of DOUBLE FORTÉ (2012).
Posted by Aaron Paul Lazar at 9:21 AM