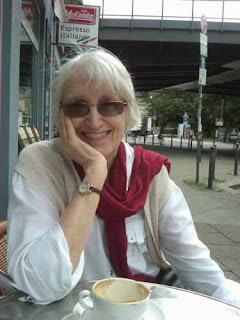 I'm honored to welcome Dorothy James today. I met this fine lady on Twitter, of all places, where her book - A Place to Die - caught my eye. We began exchanging emails, and I discovered she was quite the international writer, with her current novel set in Vienna, one of my favorite places. You may remember I reviewed her book here. Dorothy was born in Wales and grew up in the South Wales Valleys. Writer, editor, translator, educator, college chairwoman, expert in the German language, and more, she has published short stories as well as books and articles on German and Austrian literature. She makes her home now in Brooklyn, but travels frequently to Berlin, to Vienna, and to her native Wales. She blogs here - about mysteries, what else?

To my surprise and delight, Dorothy picked up the first of my LeGarde Mysteries, read them, and performed an in-depth scholarly review to the start of the (ultimately) ten book series, analyzing the content and style with incredible insight. She really "got" me, probably more than any reviewer has in the past. She even discovered my inability to integrate good and evil, my operatic separation of heroes and villains, and she touched on some really interesting psychological discoveries that even I hadn't faced. Very cool. Thank you, Dorothy.

Aaron Paul Lazar is an all-American writer of popular mysteries. He sometimes calls them country mysteries, and this goes some way towards describing them. Because I come from Britain and have many connections with Europe, I might wish to call them “American country mysteries.” Certainly they are a far cry from the formulaic English country-house mysteries, and they do not in the least resemble the many English murder mysteries set (with notable lack of verisimilitude) in the charming little villages of the South of England. Lazar’s country mysteries are unique, at least in the context of my own reading. And they are very American. Why do I say that? Because I cannot imagine finding anywhere but in the USA Lazar’s particular blend of romance, family affection, church-going warmth, appetizing home cooking, enthusiastic gardening, breath-stopping suspense, villainous behavior with murderous intent, all put together with intelligence, good humor, story-telling skill and a bubbling-over of imagery, more than a touch of naïve and lovable optimism and an overpowering sense that although particularly nasty and violent men keep cropping up, East Goodland (well-named) in the Genesee Valley in upstate New York is still the best of all possible worlds.
Lazar is a prolific writer, and I am going to confine my discussion here to the first five of his Gus LeGarde mysteries. These are the novels that set him on the road to becoming a writer of mystery novels, and while he may have refined his writing skills in his later novels, these are the novels that drew me into his world, and I would like work out why, what is their attraction? Why do I keep coming back to see what is going on in East Goodland?

In order of their appearance they are:

Double Forté and Upstaged, first published by Publish America in 2004 and 2005, and soon to be re-issued by Twilight Times Books.

Tremolo: Cry of the Loon, published by Twilight Times Books in 2007


All these novels are also available on Kindle and in numerous other e-reader formats, and since Aaron has agreed to be interviewed on this blog, I will be asking him more about the ways in which he wrote and published these novels, but today I want to concentrate on some aspects of the novels themselves.


The hero of this series of novels is Gus LeGarde—not a detective, not a policeman, but a professor. Not by any means a stereotypical professor. He is a professor of music in a local upstate New York college but we see a lot more of him in his house, his garden, his kitchen, his church, than in his college. These are no typical college mysteries with a cast of faculty members as suspects. They are mysteries in which Gus himself is at the center, often not so much in a detecting role as in the role of potential victim of a dastardly character or characters who pursue him and his loved ones, often in hair-raising chases. Professor he may be, but he is an outdoors type, who skis, rides horses, runs, swims and when necessary packs a mighty punch. He himself is the recipient of so many blows to the head that one would fear for his sanity if he did not have an amazing ability to get back on his feet and fight another day.

And yet Gus is not a violent man. On the contrary, he is a loving, sensitive and of course musical soul who tends to get involved in crime only because he is concerned about his fellow men, and particularly about children, women—and animals too. It is this concern and the compulsion to step in and help those in trouble that usually makes him, and often his wife, the direct target of various villains’ wrath.


When we first meet him in Double Forté, he is a widower, a middle-aged grandfather, who has already known tragedy in his personal life through the illness and death of his beloved wife, Elsbeth. read more here...
Posted by Aaron Paul Lazar at 11:33 AM