Review for THE ABDUCTION OF MARY ROSE by Joan Hall Hovey, review by Aaron Lazar 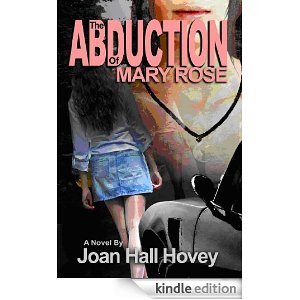 I have been a fan of Joan Hall Hovey since I read CHILL WATERS last year. After that, I reached for each and every release with the same excitement I do for new books by bestselling authors like Dean Koontz. And with THE ABDUCTION OF MARY ROSE, Ms. Hovey follows in the same tradition of grabbing her readers by the throat and never letting go until the final pages bring the story to its ultimate resolution.

It’s not so much the de facto smooth writing skills, or the vivid scene-setting that makes you feel as if you are right there with the protagonist, or the wonderful, natural-sounding dialog, or the edge-of-your-seat suspense, or the wild chase scenes that keep you up into the wee hours of morning with your heart pounding...No, I expect all of these elements in this author’s books. What shines so brightly above and beyond these great traits, however, is Ms. Hovey’s characters. Rich with back-story, as real as the person sitting next to you on the couch or in your office, these people leap off the page and invade your mind, lingering for weeks or months afterwards.

In THE ABDUCTION OF MARY ROSE, you’ll immediately begin to root for Naomi Waters, a twenty-eight year old woman who records audio books for a living. Bright, loving, and a dedicated daughter, her story starts at her dying mother’s bedside.

Now, imagine losing your only parent to a devastating disease. On the day of the funeral, now imagine discovering that she wasn’t your mother, that you were adopted. With that comes the knowledge that the photo on your dresser of your long dead military hero father was fake, too. Add to that the sudden unveiling of all this through your mother’s obituary, written by the nasty sister of the only mother you ever knew, and you have the springboard from which this riveting story moves forward.

When Naomi starts to dig into her birthmother’s history, she’s horrified to discover that poor Mary Rose was only sixteen when she was abducted, brutally raped and left for dead. The Micmac native girl lived long enough in a coma to give birth to Naomi, then died shortly thereafter. The case was never solved, and for nearly thirty years the rapist and his cohort have lived free among the local townspeople. One elderly witness saw two men take her back then, but couldn’t react fast enough to save the poor girl when the abduction happened.

Ms. Hovey’s scene of the abduction broke my heart. I’m still upset about it, and still feel ragged hatred toward the men who took her, used her, and threw her away. I am filled with sorrow for Mary Rose’s dear, sweet grandfather, who lost his only family member to violence of the worst sort. I’m not sure I would have survived such a loss, to tell the truth.

Yet through all of this tension and horrible upheaval, Naomi vows to dig into the past, catch her mother’s killer or killers, and bring them to justice. With skills that rival some of the best detectives, born of a passion to avenge her mother and a close spiritual connection with Mary Rose, she steadfastly makes progress in spite of the local police’s lack of interest.

In Joan Hall Hovey’s inimitable style, she ratchets up the suspense and fear as the story unfolds. Naomi goes public, gains the interest of the locals, and in particular one very brutal and nasty man, her mother’s rapist and her biological father.

The problem is, this man has no conscience, and only wants to destroy the DNA evidence of his misdeed that lies within Naomi’s cells. The final scenes will have you rooting for Naomi and clinging to the edge of your seat. They are brilliantly rendered.

When you buy this book–and I highly recommend you do–you need to set aside time to read. Start it on a Friday night or Saturday morning, or you’ll be calling your boss to take a vacation day. Yes, it’s that good.