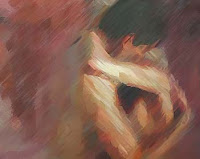 When I first started writing the LeGarde Mystery series in 2001, my daughters were teenagers. I was very careful to imply desire, to hint at bedroom scenes, and to be sure all references to intimate sexual relations were confined to a healthy marriage.

After all, I couldn’t let them think that Dad “thought” like that, or that I blithely wrote about all the things about which I constantly warned them.

Raising girls in late nineties and early in the millennium was not easy. Social pressures abounded. From what I heard, most of my daughters’ classmates lost their virginity in middle school, and if you were one of the few who didn’t have a boyfriend, you were an outcast, a reject who wasn’t worthy of friendship.

It drove me nuts.

So I was very careful not to write about things I preached against, and thus my first and even second mystery series were quite wholesome. Not that Gus and Camille had more than a Victorian relationship until they were married. Sure, Gus longed for Camille in a very real and normal fashion. But he respected her past – a sad life with her abusive ex-husband – and he also had trouble ridding himself of his long time allegiance to his wife Elsbeth, who’d passed before the first book was written.

By the time I was working on my third LeGarde book, my star-crossed couple was finally united in marriage, and I wanted to write their honeymoon consummation scene. It was important for me to show Gus’s tenderness and his gentle treatment of his bride. And after all, my fans had been waiting a while for this moment. I had more than a few letters from readers (mostly men), asking when the heck Gus was gonna get the girl, so to speak.

Something funny happened around the time I wrote Mazurka. I realized that my girls were not reading my work, (not much, anyway) nor were they in the least excited about Dad’s writing career, awards, or publishing credits.

No, their lives consisted only of real relationships, school plays, and boys, boys, boys.

How do you think I got this sprinkling of silver on my temples?

As difficult as it was in this phase of their development, it did free me up to write a bit more spontaneously. So I penned the scenes with tasteful romance, including only a few references (again implied) about the actual acts involved.

With a feeling of relief, I just relaxed and where it seemed appropriate, included some new scenes for my readers, including a shower scene after Gus and Camille were almost killed in the underground Parisian Catacombs. It was an affirmation-of-life type of scene, and gave me the freedom to experiment with some scenes.

“The soap and water streamed down her skin, intimate in its contact, curving along her hips and down her thighs to her feet. As we lathered each other, a mad desire to celebrate life consumed me. My lips touched hers. She hesitated for a moment, looked up at me through long, wet lashes, and then kissed me back.
It was different from the first time, almost frantic now. There was no shame in her eyes, no glimmering ghosts of our past. Although some of my injuries ached when we pressed together against the shower wall, the warm, moist coupling washed away the blood and pain.
When it was over, we embraced beneath the spray. Without warning, I choked up. She began to shake and looked at me. I recognized the hot burst of emotion that seared and welled in her eyes.
I fluttered sweet kisses over her mouth so she wouldn’t cry. She circled my waist with her arms, and kissed me back urgently. Dark hair streamed down her back as the water flowed through her sodden curls. She lay her wet face against my shoulder and held me tight.”

By the time I’d written seven more LeGarde Mysteries and three Moore Mysteries (featuring the green marble, a talisman between Sam Moore and his long-dead little brother Billy), I realized no matter how many free copies I’d give my daughters, they just weren’t interested in reading that much. Now they’re all adults with husbands and kids and it was time for me to let loose with whatever I wanted to write. And if they somehow, some day discovered that Dad had thoughts like a real man, well, so be it. LOL.

Next week I’ll write about how to pen love scenes from a woman’s POV, which I’ve done in my new Tall Pines Mystery series (For the Birds, Essentially Yours, Sanctuary) as Marcella Hollister, wife of Quinn and former lover to Sky Lissonneau. When Sky reappears after being MIA for 18 years, Marcella goes through some deep and difficult emotional challenges when he drops back into her life.

In my humble opinion, there’s room for a little romance in almost every genre. Mystery, thrillers, and suspense can all be spiced up a bit without dropping suspense or departing from the main story.

Enjoy your weekend, and remember, if you love to write, write like the wind!