Hello, fellow writers and readers. You may have noticed I've been sort of missing lately. I haven't blogged in a while, and I've neglected to comment on the articles of others. This piece is my first in quite a while, and I hope it will at least in part explain what's been going on in my life.... Thanks for your patience, I love you all!  - Aaron

I've always loved mysteries, and mysteries featuring horses have topped the list since I was a kid. In my youth, I devoured books by Agatha Christie, John D. MacDonald, Rex Stout, and many more, but one of my very favorites was Dick Francis, who I've re-discovered because of a weird and frustrating event in my life.

Since I got a wake up call from my doctor last July (high sugar, type II), I've put almost all of my energy into getting healthy. I get up at 5 AM, do my chores around the house, then take off at 6:30 for a long walk up and down dirt roads with big hills (3-5 miles depending on the day) to get my stupid liver in gear.

All is good now. I'm on a routine. I'm healthy. My cholesterol is fantastically low. My BP is good again. And I'm now my doctor's poster boy for how to handle type II Diabetes without medication.

One of the finest outcomes of this whole maddening situation has to do with what I do while I walk.

I listen to so many books per week now, my intake of books has doubled, and that's on top of my eBook consumption which had already quadrupled my "normal" quota of print books. It's phenomenal!

I listen while walking for 1.5 hours daily. I listen in the car to and from work. And I even listening while grocery shopping.

I'm talking about audiobooks, of course, the latest and greatest super duper thing to come from bluetooth and wireless technology. With the help of Audible.com, I've gone through all of Michael Prescott's tautly written thrillers. I've been buying and listening to  John D. MacDonald books (Travis McGee series, I intend to listen to the all), and lately I have re-discovered Mr. Dick Francis and his string (not series) of amazing British mysteries often set on racecourses or in the beautiful country-side of England.

I feel as if I'm delving deeper into this talented writer's words than ever before, when I read and coveted his paperbacks long ago. The interpretation by narrator Simon Prebble is so poignant, so intimate, so... gosh darned moving, that I think I'd be entranced listening to this man read the phone book.

Here are a few of the books that I've recently listened to by Mr. Francis, who passed away in 2010. Each time I listen to one of these books, it becomes my newest favorite. Honest, that's how good they are. I heartily recommend each one! 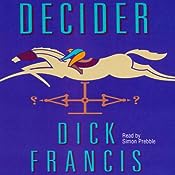 The stakes are deadly at Stratton Park. Architect and family man Lee Morris never gave much thought to the shares he inherited of the Stratton Park racecourse, the multi-million dollar property owned by the powerful Stratton family. His mother had first received the shares to keep her quiet about the abuse she had suffered at the hands of her first husband, Keith Stratton. Now, much to Lee's chagrin, he is being drawn into the thick of the Stratton family squabbles as they wage a furious debate over the future of the race track.

So when Lee packs his six sons into his renovated old bus to visit the racetrack, he finds himself embroiled in a supremely dangerous game that extends much deeper than horse racing. And perhaps too late, Lee realizes his involvement in the racetrack may cost him more than he bargained for. It may cost him his life.

My comments: This would be one of my top audiobooks to recommend. Outstanding quality, story, performance. One of my all time favorites from an already favorite author from way back. I wish Mr. Francis were alive to share my reviews with - I am so grateful for his insight, talent, and inspiration to all writers. ;o) 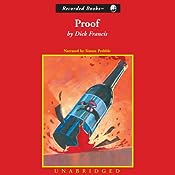 After a shattering accident plunges a society soiree into chaos, an unassuming wine merchant is left with the bitter aftertaste of suspicion and fear. While catering an outdoor party for a prominent horse trainer, Tony Beach hears rumors of inferior whisky being sold under premium labels. All of that is forgotten, however, when a runaway horse trailer suddenly plows into the guest-filled tent. Later, after the last victim is pulled from the debris, he begins searching for answers to both the fraudulent spirits and the disaster.

As Tony follows up leads, he finds himself pulled deeper and deeper into a treacherous world filled with greed, deception, and unspeakable murder.

Incomparable storyteller Dick Francis grabs your attention on page one and keeps you riveted throughout to the smashing finish. With narrator Simon Prebble’s dramatic timing and superb accents, you’ll find Proof a vintage mystery to be savored.

My comments:  I just finished this book this morning, and I'm still mourning it's end. How will I go on without my daily fix? (aside from starting the next Dick Francis audio book!) The author brought to life a man who suffered deep and traumatic losses, and in the background, oh so subtly, makes his readers/listeners fall in love with the character. A true masterpiece! 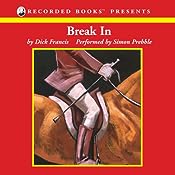 Jockey Kit Fielding has been riding the de Brescous horses in a succession of triumphs on the race course. But this winning streak is about to end. Kit’s twin sister, Holly, has come to him in desperation. Threatened by financial scandal, she and her husband may lose their training stables. Kit soon finds, though, that a greater danger lurks behind the threat - one that could be fatal.

Narrator Simon Prebble has received enthusiastic praise for his superb performances of the Dick Francis novels. His sophisticated British voice is perfect for Kit Fielding, the elegant duchess who employs him, and the other polished residents of the horse racing world.

My comments:  The rendering of the various British accents, handling of youth vs. elderly ages, women vs. men's voices... beautifully done! Kudos to an outstanding narrator, and of course, to the amazing talent of the late Dick Francis. 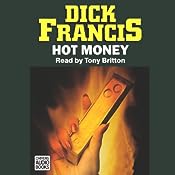 Malcolm Pembroke never expected to make a million pounds without making enemies. Nor did he expect his latest wife to be brutally murdered. All the clues suggest the killer comes from close to home, but after five marriages and nine children, that still leaves the field wide open. When he find his own life in danger, Pembroke entrusts his safety to his estranged son, Ian, an amateur jockey; and through him discovers a compulsive new outlet for his financial expertise. Soon he's playing the international blood stock market for incredible stakes. Not the safest bet for a man on the run from avaricious relatives. Particularly when one of them's got a bomb.

My comments: This book was the first freebie I got from Audible. The narrator, Tony Britton, was quite talented, but in my humble opinion, he didn't quite match the level of Simon Prebble. Don't know if anyone could! Good story, however, which held my interest throughout.
Posted by Aaron Paul Lazar at 2:08 PM