Thought you might like to see a review I just finished for a debut crime author. Let me know what you think of the review and/or the book! 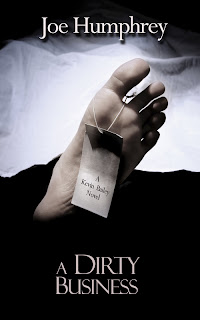 
A Dirty Business, the new debut crime novel by Joe Humphrey, goes down smooth and easy, like a slug of Chivas Regal on the rocks.

Kevin Bailey, a young black man recently back from a self-imposed hermitage in the Blue Ridge Mountains, returns home to the color and vibrancy of New York City, broke, with no place to live, and badly in need of a job. Armed with a degree in criminal justice and a kindly referral from a friend in Harlem, Bailey lands a job at Frank Givens’ detective agency.

His new boss, swamped with work, throws Bailey a test case that should be cut and dry: a simple assignment from a NYC socialite to dig up dirt on her son’s gold-digging prospective fiancée. The client, a pompous blue-haired matron named Selena Eldritch, reluctantly confides in Bailey, whose shabby clothes initially weaken her confidence. Resolved to improve his image and show this woman and his boss that he has what it takes, Bailey digs into the case with gusto.

With a photo of Edward Eldritch and his girlfriend Donna Greenwood in hand, Bailey tails Eldritch on a wild pursuit hours away from Manhattan. After winding through villages and chasing the Hudson north, they arrive in the historic village of Cold Spring, where Eldritch meets a brunette and ducks into a local tavern. Bailey, bold as brass, follows them inside and learns the woman’s name is Donna Greenwood.

Problem is, she doesn’t match the blond in the photo. If the gold-digger isn’t Donna Greenwood, who is she?

What appears to be a straightforward case begins to unravel into a tangled web of intrigue and bizarre obsessions. When Bailey finally identifies the blond as Norma Vidon, he discovers she’s been missing for two years and the local police have apparently given up on the investigation. Bailey’s sense of injustice kicks in, and like a terrier on a bone, he gnaws at it with diligence and purpose, unearthing dead bodies and intriguing red herrings that keep the reader guessing until the end.

Mr. Humphrey writes with a strong sense of place and a consistent voice, with none of the pretentious tools often found in new writers. His style is simple and engaging, and the story moves, whether Bailey is in a fistfight in a parking lot or staking out a suspect and calmly observing the detailed architecture of a building. Following is a sample of Mr. Humphrey’s style.

“I missed out on the B&B’s inclusive breakfast and was sore about it all morning, but nothing was more aggravated than my stomach, which, at the moment, sounded like a humpback whale splashing around in a puddle.”

Mr. Humphrey offers a touch of romance in the appearance of Amelia Helton, a delightful waitress with smooth caramel-colored skin and a ready smile who warms to Bailey and will hopefully play a larger part in the mystery series.

This reader will anticipate the second book in the series, and hopes that Mr. Humphrey is writing fast.


***
Aaron Paul Lazar is an engineer by day, but his passion lies in writing. The first book in the LeGarde Mystery series, Double Forté, is an absorbing tale of love, intrigue, and murder; “a feast for the senses that will leave you breathless.” Upstaged, the second book in the series, features a disturbed stage mother, a deviant predator, and a twisted saboteur who lurks backstage, terrorizing the drama club with deadly, psychotic games. “Lush, vibrant, and delicious.” Lazar’s latest book, Tremolo: cry of the loon, a literary coming-of-age mystery, is available through Twilight Times Books.

Lazar’s monthly columns are featured in the Futures Mystery Anthology Magazine, Voice in the Dark newsletter, and The Back Room ezine and his writing advice articles have been published often in Absolute Write. He lives in Upstate NY with his extended family. Visit his websites at http://www.legardemysteries.com/; http://www.mooremysteries.com/, and his blog: http://www.aaronlazar.blogspot.com/.
Posted by Aaron Paul Lazar at 12:02 PM

Glad to have found you right back! This is a great place to visit with a cup of tea.

I'll be back often!