There's a first time for everything. 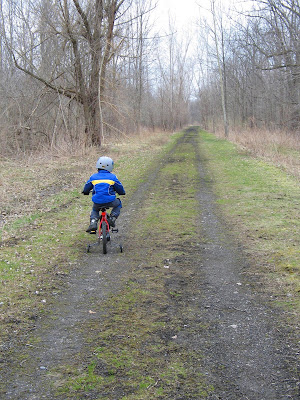 Yesterday, I took my grandson, Julian (4), on his first bike ride that was longer than our living room. He'd been scooting and careening all over the downstairs for a week, since we bought him a new bike. Red. His favorite color. And really shiny, with big knobby wheels.We live in the country, but our roads are traveled by many farmers, tractors, milk trucks, and commuters. Our corner has a four-way stop sign, but folks don't always stop, and I don't trust my rambunctious little grandson out there on his bike, even on the driveway.

He just learned to turn and brake his new bike on Wednesday. Yesterday, after a family emergency the night before that had his mom a hair's breadth away from surgery, I stayed home to help watch the boys so she could recover from her ordeal and sleep a bit.
Daughter Allison and I took him to the Greenway that starts out at York Landing, in Fowerville, NY. You remember the Greenway, right? I've posted lots of pictures from this wonderful trail system in Upstate NY before. It follows the old railroad bed that was laid atop the original Genesee Valley Canal tow path. Now it's a beautiful place to ride or walk. 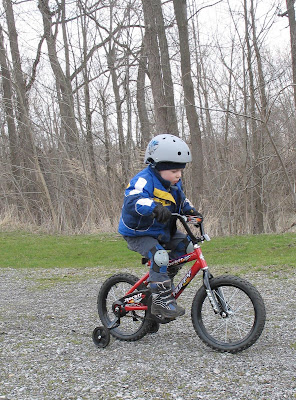 When we got there, Julian was so excited he could hardly wait to get started. But the soggy ground was a bit hard to get started on. He really had to push down hard on those pedals!
When we left the gravel and hit the grass and mud, he really had a problem when his training wheels were up high and his tires rode in the shallow depression. The tires spun, his face crumpled, and he became very frantic, on the verge of tears.
"Papa! It's too hard!"
I grabbed hold of his handle bars and walked beside him, guiding him and helping him stay upright. 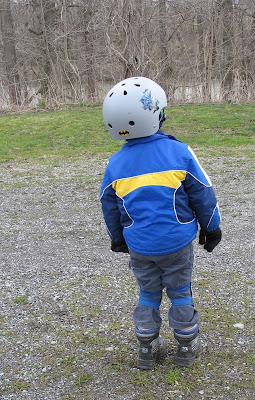 At one point, we stopped to listen to hundreds of Canada Geese flying overhead. Their honking was an elixir to him. He stopped, watched, and listened. Then he got back on and tried again.
We found a level spot that had been graded with some new gravel, and sat for a long time, letting him ride back and forth along a nice stretch. He got better and better, and worked out all that little boy energy that had been pent up the whole cold, cloudy week.
Then the sun came out, for a brief, flash.
It was a beautiful moment. We packed up his gear, took off his knee pads and helmut, and headed home, after promises to return soon. Next year, when his brother turns four, we'll all head out together.
I usually walk the Greenway.
But next year, maybe I should get a bike!
Posted by Aaron Paul Lazar at 9:18 AM

A fine post. He'll love the pictures in later years. I'm sure he will never forget his first bike.

Thanks, Steve. And next year, maybe we'll be able to get rid of the training wheels! ;o)

Cool bike, cool story. You're making me wish I had some grandkids, Aaron. My son is only 14, though, so I have a LONG wait ahead of me. At least I BETTER have a long wait. ;)

Ha, Jude, you NEVER know. My daughter was 19 when she had Jules and 20 when she had Gordie. Now she's in college and will get her nursing degree after one more year. She's a great mom, we would NEVER change a thing, but we sure didn't expect the timing to work out the way it did. I'm glad, though. It's made our lives so incredibly rich. I thank God every day for those little boys. ;o)