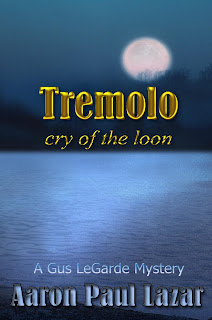 This is the third book in the Gus LeGarde series of mystery novels. Unlike the other books, it takes place when Gus was a boy of eleven and he and the twins, Elsbeth and Siegfried Marggrander, vacation at a Maine resort run by Gus’s grandparents. Lazar has drawn heavily on this material in his other books and in this one he proves what a rich source it is.

As Gus and the twins return home from a boating accident, they encounter a young girl, bleeding from a blow to her mouth, and pursued by a drunken man whom they assume to be her father. The search for the missing girl, Sharon Adamski, runs through the story, in some ways its dominant thread but not the one that most occupies the reader.

The real attraction of the book is – and this quality it shares with the other Gus LeGarde books – the charm of the author and the opportunity for the reader to share in a gracious life built on warm relations with family and friends. The joys of the table and the love of music and the appreciation of the quiet joys of reading embrace an ideal but not impossible world. Lazar has added other strains to this medley. An occupant of one cabin is the mysterious Miss Jones, in reality Rose Kennedy seeking a quiet retreat where she can mourn the death of her son, shot down by an assassin in Dallas. She and young Gus become friends and it is he who rescues her cat Ivanhoe, frightened by a burglar.

It is no accident that the villains in Lazar’s books are villains without redemption. Like a figure from Elizabethan drama or opera they will not only stop at nothing, they will joyfully add gratuitous evil deeds beyond what any reader could expect. It is as if the existence of unqualified malevolence in others is the cost of Gus’s idyllic world, a kind of restoration of balances. Brigit Marggrander, mother of the twins, was the victim of the camps in Germany during World War II. This is another strong statement of the evil that exists in the outer world beyond the charmed circle of the LeGarde family and friends.

Lazar cleverly involves the story with To Kill a Mockingbird, a movie that Gus sees with his parents and which they all find overwhelming. It is a brilliant choice for it is a parallel with the LeGarde circle and the circumstances of Tremolo.

This – if the world is at all just – should be the break-through book for Aaron Paul Lazar. He has served his apprenticeship with two excellent works, but Tremolo reaches far beyond these and is a monument to the enduring values of love, integrity and bravery. Experimental writing is fun but charm and honesty and high ideals have staying power. Tremolo has all the signs of persistent endurance.
***
About the Reviewer: Bob Williams is retired and lives in a small town with his wife, dogs and a cat. He has been collecting books all his life, and has done freelance writing, mostly on classical music. His principal interests are James Joyce, Jane Austen and Homer. His writings, two books and a number of short articles on Joyce, can be accessed at: http://www.grand-teton.com/service/Persons_Places
Posted by Aaron Paul Lazar at 9:26 AM