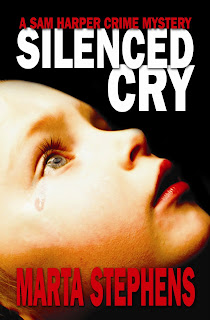 
Heads up, mystery lovers. There’s a new crime writer in town, and her name is Marta Stephens.
Stephens’ debut novel, Silenced Cry, is supremely addictive, propelling readers into the action from page one and corkscrewing through a wild ride of corruption, abuse, and villainy.

When Detective Sam Harper’s partner, Frank Gillies, gets a peculiar tip about a drug-related suspect holed up in a local bar, they hurry to apprehend him. The bust goes terribly wrong, and in one heart-pounding moment awash with bizarre twists, the suspect and Gillies end up dead in a rain-soaked alley.

Riddled with guilt and facing an increasing number of unanswered questions about Gillies’ past, Sam tries to move forward, but becomes exasperated when he’s placed with a new partner who hails from a corrupt precinct. In spite of their rocky start, Harper and Mann learn to tolerate each other. Their first case calls them to a construction site to investigate remains found in a sealed up wall. Horrified, they discover the remains belong to that of a baby girl – killed when she was only days old.

The cold case consumes Harper, who digs into the past with persistence and unparalleled drive. Strange connections with his and Gillies’ past pop up. Walt Harper, Sam’s father and an ex-cop familiar with the suspects, grows distant and secretive.

What is Walt hiding from his son? And could it possibly relate to Sam’s partner’s death? The answers lie embedded in a complex maze that will shock and satisfy the most assiduous crime mystery buff.

Stephens writes with a consummate skill. She’s serious about her craft, and it shows. Tight suspense, perfectly chosen verbs, natural and innovative beats, and authentic dialog propel this work to a level far beyond those works commonly found on the best sellers list. Stephens’ writing soars with focused intensity and her characters are real – they hurt, they fall in love, they suffer angst and explode with anger.

Stephen’s second book in the Sam Harper series promises thrills and intrigue matched only by Silenced Cry. This reviewer will be first in line for his much-anticipated copy.

Double Forté is the founding book of the LeGarde Mystery series and was released in November, 2004. Upstaged followed in October, 2005. His third, Tremolo: cry of the loon, was released via Twilight Times Books in November 2007. Mr. Lazar is currently working on his twelfth book, For Keeps. The first book of his paranormal mystery series, Moore Mysteries, will be released in early 2008, followed closely by Mazurka, the next book in the LeGarde mystery series. He is a regular columnist for FMAM (Futures Mystery Anthology Magazine), Mysteryfiction.net and has been published in Great Mystery and Suspense magazine and the Absolute Write Newsletter. Contact him at: aaron.lazar@yahoo.com, visit his blog at aaronlazar.blogspot.com, or stop by his websites at http://www.legardemysteries.com/ and http://www.mooremysteries.com/.
Posted by Aaron Paul Lazar at 6:31 PM