Book Review for THE WOMANIZER by Warren Adler 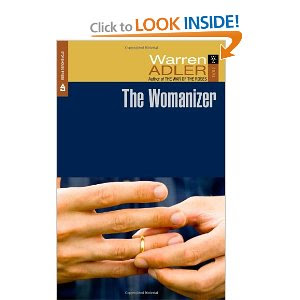 Warren Adler is a master student of the human mind, its inner workings, and the interesting, bizarre pathways that occur in (particularly) disturbed or non-heroic figures. In THE WOMANIZER, Mr. Adler delves into the life of Allen Harris, a man who has had three intense love affairs while being married to his adoring, long-time wife, and in his usual, inimitable fashion, the author evokes unexpected empathy for this seriously flawed character.

I despise the behavior of infidelity, (I believe marriage is forever unless there are some very bad extenuating circumstances, and I really look down on adulterers!), but Mr. Adler actually made me sympathize with his Mr. Harris. Now that's true talent. I admire the writer who can take a despicable man or villain and elicit sympathy from his readers, in spite of the awful truths that cannot be denied. Mr. Adler is very good at shades of gray in the literary painting of his characters; he provides a great example for those of us who always seek to improve our own writing and characterization.

The journey from current day reflection ("I am up for a new prestigious job, will they find out about my affairs and disqualify me?") to the intense and really convoluted thoughts flashing back to past relationships ("I really love my wife and would never leave her, I don't know why I'm doing this, but I'm still a good husband...") to the obsession about how deeply our protagonist must have affected the women with whom he had these affairs ("Will they seek revenge? Will they ruin my chances?") to the deeper, darker thoughts that made me wonder if this guy would simply kill them all to shut them up...  it was quite a ride!

Here is a passage that depicts the inner workings of Mr. Harris's delusional brain, with apologies to Mr. Adler for removing a few of the more provocative words for the sake of making this review easily accessible to all:

"In a strange way, time had distorted the old fear. Once his primary anxiety had been exposure, blatant, in-your-face exposure, a full-blown confrontation, in the midst of, as they say, flagrante delicto in living color, imagined as a kind of movie in his mind. There he would be, caught in the act by someone, a photographer perhaps, disengaging in panic, revealed with moist dwindling tumescence, his skin flushed pink by aborted passion and embarrassment, while his partner of the moment was poised and ready. There they would be the three of them in a tableau of expectation, rage, shame, and humiliation.

Explanation would be impossible, although he had gone over the possibilities in his mind again and again. He would have had to compound the felony with meaningless protestations as if the female human he had held in thrall at that moment did not exist, was an illusion, a kind of ghost. It was nothing, he might whine, merely a roll in the hay, a passing moment of pure lust, “commanded by the one-eyed monster,” as McNaughton, his partner, a blatant philanderer, put it often. The truth lay elsewhere. He could, of course, find excuses and rationalizations like Sandborn’s contorted explanation, implying the ruthlessness of the male libido, which could attack self-discipline like a virus.*"

There is a lovely surprise twist toward the end, and although it felt like the very end was a little abruptly ended (my humble opinion), it is worth the read, especially to those who marvel at the capacity of the human mind to delude itself.

Mr. Adler professes to write "genre-less" fiction. If pressed to assign a genre, I'd say this falls into literary fiction or psychological drama. Not that it matters, it's still a fascinating read.