Writer's Rant (My name is not Paul!)


When I published the first edition of DOUBLE FORTÉ back in 2004, I had to decide how I'd brand myself as an author. That started, of course, with my "author's name." At first I chose a pen name - "Jack Beauregarde". I was pretty happy with it - after all, there are many beloved "Jack's" in our country's history! But soon I was chastised by a colleague who convinced me to just be me, and to use my own name on the cover.

So I thought about authorly sounding presentations. Aaron Lazar seemed boring. Aaron P Lazar seemed weird. Aaron Paul Lazar (my real, full name) sounded a little pretentious, but it also reminded me of other author's who have used their middle names to distinguish themselves from other folks with their name.

When I tried to start up my website, I soon learned that there was indeed another Aaron Lazar (an actor from NYC) who already had aaronlazar.com, and it was at that point I realized it might be a good idea to include the middle name. Here's how it looks on my book covers: 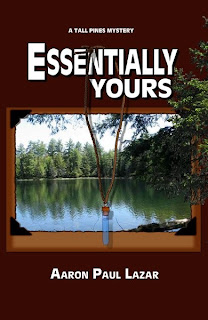 So, I made my decision and stuck with it all these years. It's worked for the most part, but now I deal with this WEIRD situation all the time.

Why is that???? It drives me kind of nuts. I'm telling you, it happens all the time - either at book signings or on Twitter or on Facebook.

I could see if I used my first initial, like A. Paul Lazar. Then of course people assume you don't want to use your first name and you go by your middle name.

So what's up with this?

While we're on the subject, let me rant a little more. The other day I was on a longgggg and exhausting call with our medical supply company. This call could warrant another whole rant, but let me just say that the third person I talked to asked me my name (again). I told him, and he said, "E-R-I-N?" I tried not to flip out, because over the years this frustration has been building in me. The poor guy probably didn't know why I answered in such a loud voice. "NO. That's the GIRL's name!" I felt bad afterwards, and apologized, but we got past that. Anyway...

Why don't people understand the difference between AARON and ERIN? Aaron is the guy's name, Erin is the girl's name. And unless you live in Rochester, NY (where they pronounce them both like AERON with a nasal twist), they don't even SOUND alike.

The "a's" in AARON are pronounced like the "a" in APPLE. Doesn't everyone say "apple" the same way?

How simple is that? If you remember your phonics from grade school, that's a "short a" and a "short e." Least it was in my school.

I guess it's pretty silly to get upset about such mundane things. But once in a while you have to get things off your chest, don't you?

I love your full name on your books, and I particularly love your writing. Looking forward to reading the next one.