So I Broke the Rules – Go Ahead and Shoot Me! (the story behind the creation of Tall Pines Mysteries)

I didn’t intend to write a series when I created the rather kooky and slightly paranormal mystery, For the Birds. I knew it would feature a pretty little red bird on the cover (see below), because I’d just had an unforgettable dream about her. Out of the wild blue yonder, Ruby came to me, landed on my shoulder, and insisted I begin a new mystery. I’ve never owned a bird, never even knew anyone with a feathered pet, but this dream was so vibrant I couldn’t get Ruby out of my mind.

Marcella and Quinn “Black Eagle” Hollister popped onto the scene as Ruby’s owners, and Marcella’s mother, Thelma, appeared out of nowhere. Before I knew it, I had envisioned a dynamic and diverse family and their pets. Staying true to my dream, I set the story in the Adirondack Mountains, which incidentally set me craving the mountains, woods, lakes, and rivers that I’d come to love. After this dream, I just had to get up there again. 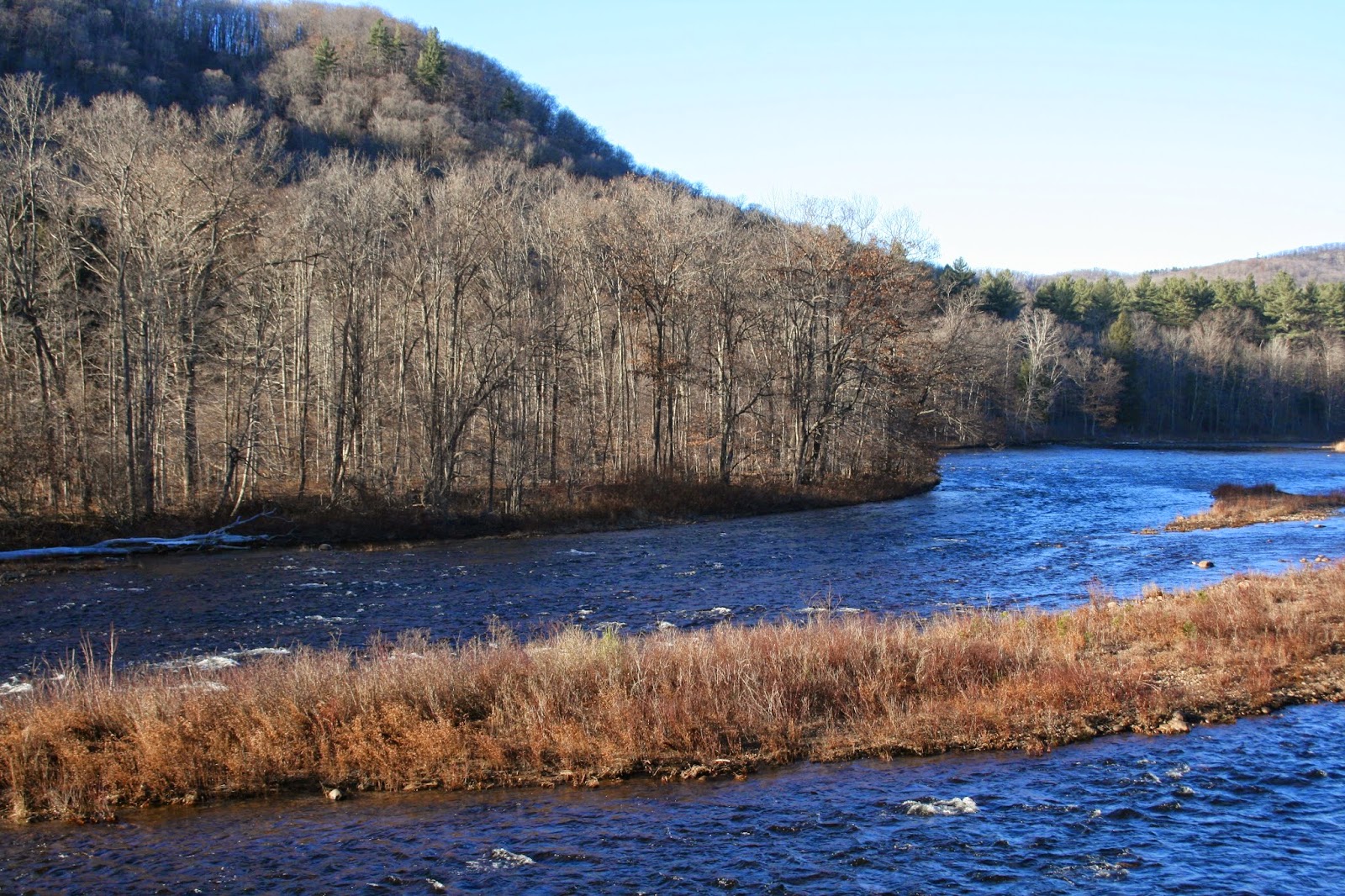 Fortunately, or unfortunately, as the case may be, I was laid off from my engineering job at Kodak right around the same time. So, with lots of free time on our hands, we headed up to the mountains and discovered the cabin where the story ultimately takes place. Tall Pines is a rustic, wonderful cabin situated on seven acres of pines above the Sacandaga River in Hope, NY. We fell in love with it and visit as often as possible. It has become the center of the series that grew from For the Birds. 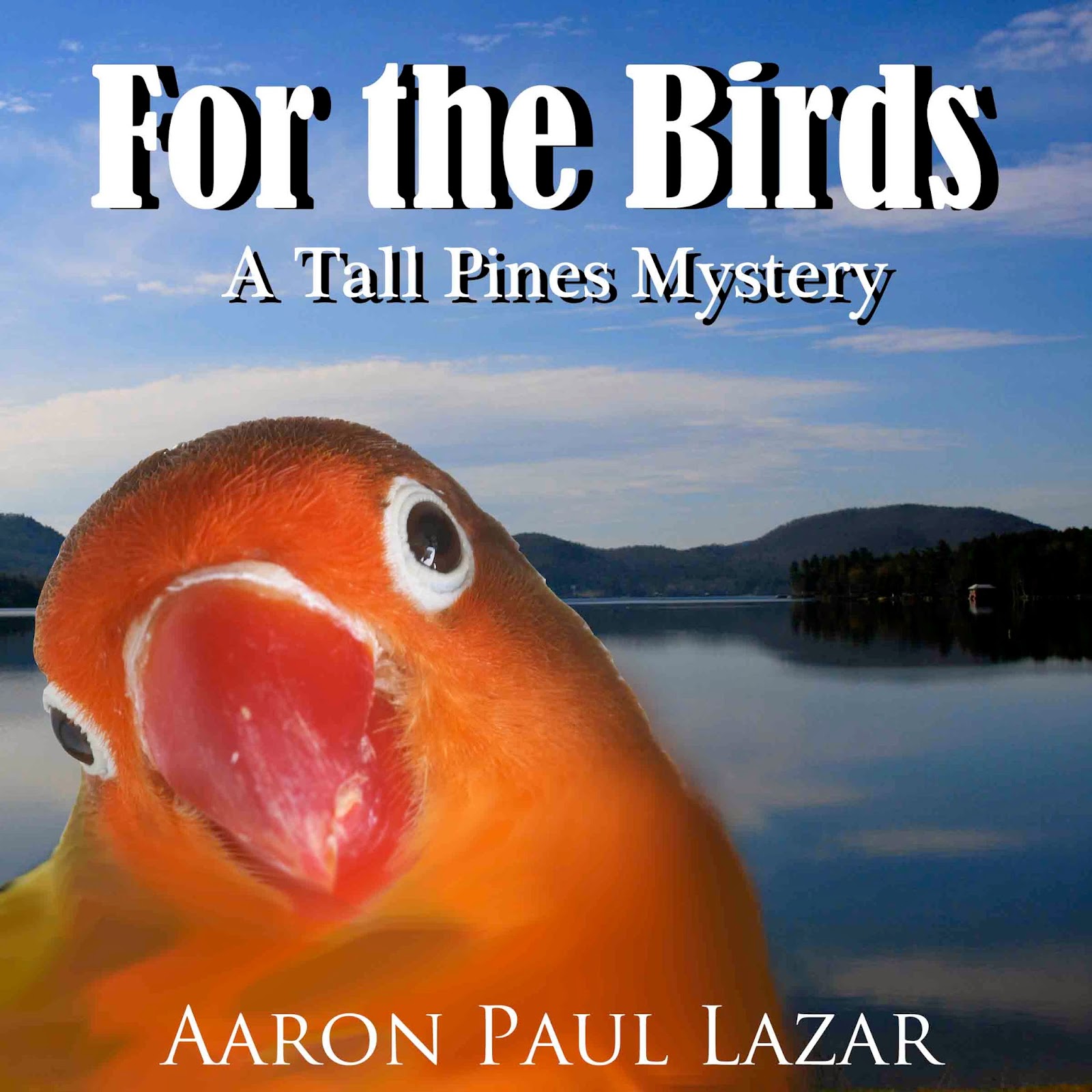 When Marcella Hollister’s prize parakeet gets zapped by a wayward power line in the same pool as her mother, the ensuing psychic link helps Marcella chase her mother’s kidnappers through the Adirondack Mountains, where she unearths a fifty-year-old secret about her dear father with shocking links to a hidden treasure.

I really didn’t plan to include paranormal or spiritual elements in For The Birds, either. I just went ahead, guns blazing, and let the story pour out of me.

You can’t exactly call me a planner, can you? I never outline my stories and usually plunge into them with just vague ideas about the conflict, mystery, and locale. I actually have a hard time keeping up with myself and all the books that want to come out. I know, that sounds nuts. But it’s how I write.

When I finished this book, I was in love with the characters. My readers wanted more of Marcella and her gorgeous half-Seneca husband, and they seemed to enjoy our jaunts to the Adirondacks. At the same time, I’d recently become infatuated and obsessed with essential oils. There was no question that my characters would also discover them, and it came as no surprise that I used the healing power of essential oils as one of the main themes in the second Tall Pines book, Essentially Yours.

Strangely enough, however, this book was a bit different. Although it’s dubbed a mystery, it had more suspense and action than the first book. If I had to give it a genre on its own, I would have called it romantic suspense, although in general terms it could fall in the broader mystery category.

Perhaps there is none, and this is where I started to break the rules about keeping ones series in the same exact genre.

If push came to shove, I’d say the consistency and appeal of the series is in the characters and the telling of a rollicking story set in the same locale. 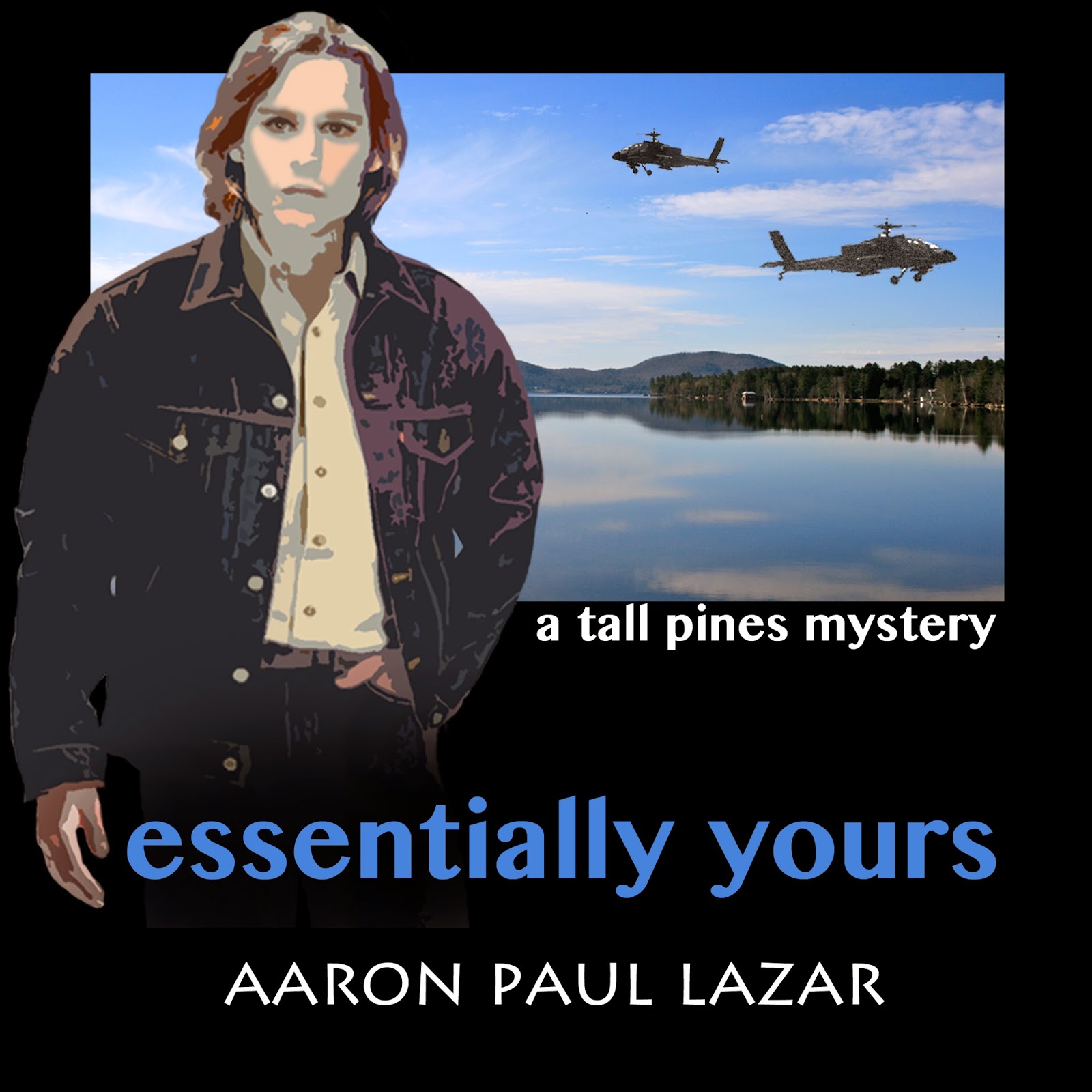 Marcella’s first love has been MIA for eighteen years. Callie, her best friend and Sky’s sister, flips out when a mysterious package from Sky arrives on her doorstep. Inside his old backpack are bottles of precious essential oils, a memory stick, and a bag of emeralds. Are these his final effects? Or is Sky alive?

Drug company goons want the data on the memory stick, because it links a newly discovered essential oil with a leukemia cure. They kidnap Callie, hoping to lure Sky into the open. Marcella and Quinn track her to the wilderness of the Adirondack Mountains, where against all odds they fight to save Callie and preserve the proof that could change the world.

The characters screamed at me to write more, especially Marcella’s newly introduced old flame, Sky Lissoneau, and his damaged, but adorable, sister, Callie. I thrived on the tension between Marcella’s husband and her first love, who showed up after eighteen years with a whole gang of villains chasing him through the Adirondack woods. Quinn—usually a quiet and passive soul—is insanely jealous of Sky. After all these years, Sky still adores Marcella, and can’t get that look of desperate heartache out of his eyes.

I let all hell break loose in Marcella’s family and in the mountains where the scientific medical studies were being held to prove that a common lake week held the key to curing leukemia. Mix together some nasty drug company thugs and a bit of mysticism with crystals, oils, and the love of a big old Bernese Mountain Dog, and you have Essentially Yours.

When I wrote Sanctuary, book three, I was obsessed with what I call “my Indian soul.” In my very distant past, on my father’s side, there was a lady of native heritage up in Canada. I’d been feeling a close connection with her and my heritage for my entire life, even though the cold light of dilution of many generations, her blood flowed in less than 3% of mine. Here is an essay I wrote about this, just for grins.

With the help of a Cherokee historian friend (Thank you, Pineleaf!), I wove substantial elements of Native American traditions into this story. Using mystical elements of crystals, smooth river stones, essential oils, and a haunted mountaintop, I pushed the psychic barrier a bit here and allowed a bit of mind-melding.

This doesn’t belong in a mystery, does it? You’d really expect it more in Star Trek. But hell, like I said, I didn’t care. I just forged ahead.

Marcella’s husband, Quinn “Black Eagle” Hollister, severed ties to his family and friends on the Seneca reservation years ago. He rarely mentions his past—until his young cousin Kitty collapses on the couple’s doorstep in the dead of a rainswept night.

After two Seneca men break into their home with intent to kill, the Hollisters flee with the mute and injured girl to Tall Pines, their cabin in the Adirondacks. Marcella, unable to bear a child of her own, unleashes her motherly instincts caring for Kitty. As the girl slowly recovers, they start to piece together who wants them dead, and why.
When it came time to write Betrayal, book four, it flowed seamlessly after Sanctuary, I wanted to create a winter mystery full of threats, sexual upheaval, and plenty of chase scenes. I didn’t expect to introduce a pair of serial killers who left bodies on the icy shores of the Sacandaga, but that’s what happened.

I also introduced some pretty dark relationship issues into Marcella’s marriage. She feels Quinn betrays her, and flees to Tall Pines to escape for a while. Trouble is, Sky is waiting there for her, and it’s all she can do not to let herself fall into his arms. The old passion is still there, and it tortures her to look into his sea green eyes. She fights the urge to give in, but wants him so much it kills her.

Marcella Hollister realized a lifetime of hopes and dreams when she was given custody of a child. A cousin of her half-Seneca husband, Quinn, the baby’s mother was murdered in a political plot—and Marcella, who’s never been able to have children of her own, formed an instant bond with little Kimi. Then a distant relative comes forward to claim Kimi—and Quinn, who Marcella thought understood her pain better than anyone, allows them to take the baby without a fight.

Confused and deeply wounded, Marcella takes off for Tall Pines, their secluded Adirondack cabin. She hopes the peace and natural beauty of the mountains will help clear her head and decide whether to forgive Quinn…or leave him. But the situation at Tall Pines is anything but peaceful. Her high school lover, Sky, arrives to help out—and Marcella discovers her old feelings may not be as distant as she thought. Worse, a serial killer is stalking young women in the area. And when a teen girl whose mother works with Sky goes missing, Marcella and everyone she cares for wind up dead center in the killer’s sights.

If I were to read Betrayal on its own, I might classify it as a romantic thriller.

Uh huh. Not a kooky, paranormal mystery like For the Birds. Not a romantic suspense, like Essentially Yours. Not a Native American spiritual mystery, like Sanctuary.

I know! Where’s my platform planning?

That said - I must tell you my Tall Pines fans and readers don’t give a darn into which official genre my books fall. You could certainly still broadly classify them as mysteries. But they don’t care, and frankly, neither do I. It’s the characters we care about, and they are going to experience life at Tall Pines no matter what genre the story falls into.

So, yeah. I broke the rules. Please don’t shoot me. Just go buy my books and see what you think? ;o)

I think this is a wonderful way to begin an unplanned series. But, as a writer, don't you find your stories taking you in different directions?
You didn't plan on a series and here it is enchanting your readers!
Thank you Aaron, for all your fabulous novels.

Thank you so much, Viv!