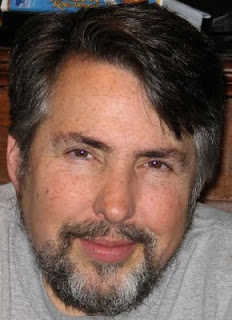 Wyoming Writes - Face to Face with Writers
copyright 2009 aaron paul lazar
You recognize this picture, right? Or at least the guy in it? That's because I'm all over the web, and co-owner of this blog. So I probably look a bit familiar.
But how many of us have met in person? Face to face? Breathing the same air?
My writerly life is full of people I adore, but most of them are a voice on the computer (or phone) and an image on my screen. I feel as if I know them intimately - at least my closest friends - and would be able to pick up a conversation in a snap if and when we meet in real life. I have had the distinct pleasure of meeting S.W. Vaughn at a book signing in Syracuse. We clicked immediately and I knew we would.
Of course these online friends are "real". And the fact that I don't get to physically meet with them is okay. But last night, for the first time in my writing life, I joined a Writers Group and went face to face with other writers.
I was very hesitant. I had no knowledge of their writing skills. Would they all be amateurs and ask me to critique their books? Not that there's ANYTHING wrong with amateurs. Heck, we all were amateurs at one point in our lives. And I do help fledgling writers all the time. But I knew in advance that I wouldn't be able to take on that kind of a work load. Hell, I have to turn down my online writer friends all the time. Would they ask me to read and review their books? As many of you know, I fit in just a few mysteries per year and struggle to get those reviews written up within 3-6 months. I wish I could do them all, but then I wouldn't be a writer, I'd be a reviewer. ;o)
On the other hand, this stupid brain of mine worried I that maybe they'd be all highbrow super academics who would look down on my mystery series. I'd read them a chapter from my WIP and they'd exchange looks of amused tolerance. Or worse. Tell me all the things they thought are horribly wrong with it. I'm open to critiques, but I was afraid of being ripped to shreds. Yeah, even after publishing four books, writing fourteen, and getting lots of great praise and reviews. I was still nervous. I don't think I'll ever outgrow the fear of being "exposed" as a horrible writer in front of academics. LOL.
Wayne, one of my old friends from Kodak showed up the other day. I hadn't seen him in ten years, and there he was on my doorstep. I was thrilled, as I'd been missing my old pals at Kodak more and more. Wayne's now a journalist for a local paper, and he urged me to attend the Wyoming Writes group as well as do an interview for his paper. He'd been wanting to check out the group himself, and thought he'd write an article about it for his paper.
So, with trepidation rolling around in my brain, I dressed up nice casual clothes and took off for Perry, New York. The bookstore where the group meets is called Burlingham Books. It's a beautiful little shop on what I call Main Street USA - a lovely historic village not far from Letchworth State Park. Wayne and I got there early, did the interview, and waited as folks started to arrive.
All my fears were completely ungrounded. The people - Tanya, Deb M, Deb S, Cindy, the Scribbler, Mr. Newton, and Wayne, were welcoming and supportive. They were mature writers who had stories and work to share. We listened to a chapter about a small country church, quirky poems, poems that painted luscious imagery, and a frank and hilarious opening to a book of memoirs. All were well done and simply delightful. I read the first chapter to Don't Let the Wind Catch You, and to my joy, the folks enjoyed it and wanted to know what happens next. :o) Always a nice sign!
After an hour of reading and sharing, we took a "field trip" to a local art gallery where a delightful assortment of paintings and watercolors were on display. We each chose a piece that "spoke" to us, and had fifteen minutes to write. On other writers' sites I've joined we called this flash fiction. You might call it postcard fiction. But whatever, it was a ball. When we were done, each writer shared his creation as we stood in front of the painting and listened. I've gotta tell you, these works were amazing. 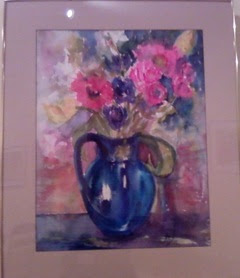 My choice was a gorgeous watercolor. A blue vase with red/pink poppies and iris, by Sandra Tyler. This camera shot doesn't do it justice by any means, but it is truly vibrant and lustrous.

Here's what I wrote in my fifteen minutes. Now don't laugh, it's not polished or anything. And in spite of the beauty of the painting, my mind turned to mystery.

Blue with Flowers by Sandra Tyler

Celeste placed the vase on the table and dropped into the chair beside it. She’d picked her mother’s poppies before, but today was different. Today her mother lay – not in the cot beside her – but beneath the ground.

The salmon poppies were the color of her mother’s favorite sweater, a fuzzy number that
Celeste now wore, wrapped tight around her thin chest. She touched the fragile petals, and couldn’t help compare it with the feel of her mother’s soft cheeks. Cheeks that had sunk deeper and deeper against her bones in the past months. Cheeks that became concave, but which still cradled a smile when her mother’s thin lips curved into a ribbon of delight. Cheeks that Celeste now saw in the mirror, reflected back at her.

She’d inherited more than just her looks from her mother. Her stubborn nature, her love of cupcakes, and her passion for all things pink had clearly sprung from the genetic well that was Mom. Dad had given her the bright red hair. But not much else.

She wished he’d come to the funeral today. At least to make things look normal. Where was he? Off with on a dalliance with a rich bimbo? At the casino? Searching for more unwitting victims?
Celeste knew what had happened. She watched her mother eat the oatmeal every morning. The oatmeal her father had prepared. And she knew. She just knew there had been something in it. Something not right.

Being ten was hard. Especially when your father murdered your mother.

***
LOL. Okay, so there it is. But the point is, if you haven't joined an in person writers group, give it a try. I'm hooked and will be attending every month.

And always remember, if you love to write, write like the wind! 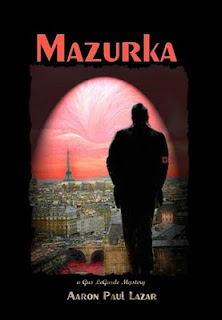 Mazurka, the fourth book in the LeGarde Mystery series is now available through the author, in special pre-release copies. Email him at aaron.lazar@yahoo.com for details.

Visit Twilight Times Books for special deals Oct 1 - Nov 15th.
This year is the 10th anniversary of the founding of Twilight Times Books (1999) and the 5th year since we went to print (2004). Those are significant milestones. In celebration, Twilight Times Books will have a print book sale from Oct. 1st to Nov. 15th. Most titles will be offered to the general public at a 10 - 30% discount.
http://twilighttimesbooks.com/print_books101509sale.html For a limited time, and while quantities last, we are offering a 30% - 50% discount on selected titles.
http://twilighttimesbooks.com/print_books101509special.html
(one of the deals is: Buy Mazurka for $15.15 and get Tremolo for $10.15 (a 40% discount))
Posted by Aaron Paul Lazar at 6:56 PM