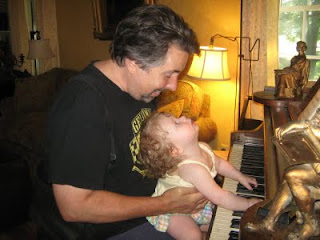 Last week I told you that I was "born to be home, tending grandkids, working the land, cooking meals from the garden, and writing 'til my heart squeezes the last words onto the page." I said that this life without a day job is the dream-come-true, the life I've yearned for every single day for the past few decades. It's my heaven on earth, my own private nirvana, my paradise.

I also mentioned that I was starting to get nervous. After applying for 35 jobs, I've had one interview (just heard the job isn't mine) and one rejection (never got an interview). No calls, no emails. No nothing! If I'm not careful, I'll start to think I must've deluded Kodak for 27 years because they consistently gave me nice promotions and always said they loved my work. I have to stop myself mid-thought, because that's a shaky place to tread for the sometimes frail ego of a mid-fifties white male in a time of few jobs and gazillions of overqualified applicants.

So, in order to squelch the nerves that are trying to break through and mess up my happy place, I've decided to write about all the wonderful things that happened because Kodak got rid of me.

Last time we discussed my new friend, Frank. G. In Part 2, I'd like to share the joy of having more time to spend with my granddaughter, Isabella. 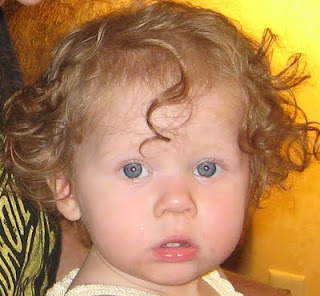 There she is. The little angel with the curl in the middle of her forehead. This thirteen-month-old-child is too good to be true. But maybe that's because she had such a tough entrance into the world, fraught with an emergency C section, almost not making it, and spending a week in the NICU. This baby sleeps 12-13 hours straight every night, takes a two hour morning nap and a two hour afternoon nap. She wakes with sweet smiles and a rosy blush on her peaches and cream skin. Okay, so maybe there's a stinky diaper thrown in there occasionally. But although my daughters ranged from what I thought were "easy" to "difficult" babies, I never knew what easy was. This child makes caring for her a breeze. Which is a good thing, since I often have her for days at a time and while I'm pretty damned energetic, I don't have the unlimited reserves I had in my twenties and thirties.

Bella is so easy to please! Bella loves cow or soy milk, and will happily drink water or juice. She eats all the garden produce I put in front of her with gusto: green beans, fresh tomatoes, watermelon, kale, beets, potatoes, blueberries...you name it, she'll eat them with unabashed enthusiasm. When she's done, she lifts her arms high above her head and somehow communicates that it's over. It's not a whine, or a screech. Just two syllable baby words that sound like "all done." She chatters like a magpie, in her own language, but on occasion we've been certain she said, "Trot, trot!" (a game we play bouncing her on knees), "dog," (we have two who love her and her mom has three), "Hi," and "Peekaboo." She hasn't said them a lot, but it was a treat to hear them for the first time and not have to get a call at work to tell me about it. Being there first hand certainly has its advantages. 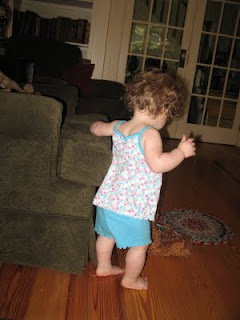 Isabella started walking a few months ago, and now runs from person to person and place to place. And man, is she smart. I'm not just saying that because I'm her grandpa, but darn it, this girl is bright! We have a toy camera that makes clicking sounds like a real shutter. It lights up and says, "Smile!" But it takes a lot of pressure to push in the button, and her teensy little fingers aren't strong enough. She quickly learned to take MY hand, grab one of my fingers, and push my finger on the button whenever she wanted the toy to do its thing! Now she does this all the time, and even holds her own little wrist to help give herself strength on the tougher jobs. It cracks me up. But then again, I'm easily amused. She's got me enchanted. ;o)

Bella had her very own first "garden tour" with Papa a few weeks back. We sampled blueberries, red and black raspberries, gooseberries, jostaberries, and cherry tomatoes. She lowered her little mouth to my outstretched hand and ate berries off it as if she were a pony taking a sugar cube from my hand. And she carried a cucumber around with her for hour after that, gnawing on it. It probably felt good to her little gums where more teeth are pushing through. 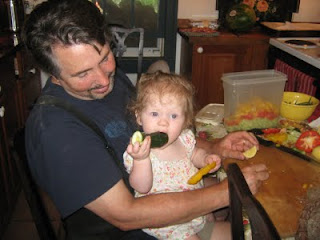 We had our very first cooking session together, something her big brothers Julian and Gordie love to do. We picked lots of veggies, then she sat on my lap while I chopped and cooked. Of course I was super careful with the knife and put her in her high chair when I needed to get near the stove. She wasn't much interested in those things, anyway, since I kept her hands full of goodies. She loved the orange pepper, but her favorite was the cucumber. And believe it or not, this little girl loves eating fresh lemons! (just like me) There wasn't a grimace or a squinch of her eyes. She sucked those babies dry.

The most exciting discovery I've made about Bella is her passion for music, which thrills me, since my father was a music professor, my grandfather was a piano teacher, my daughter is a singer and music therapist, and my main character in the LeGarde Mysteries is a music professor as well.

As soon as she arrives for a visit, Bella runs for the piano, and starts pressing keys. Her great grandmother (my MIL) holds her on her lap and plays the Hungarian Rhapsody for her. I do the same, and Bella holds my two index fingers while we play chopsticks together. Okay, so I'm a little rusty on my Chopin waltzes... She has a peculiar way of asking for me to repeat the song, a sort of little jiggle and bounce with big eyes turned up at me. There's no doubt that it means, "Do it again!" 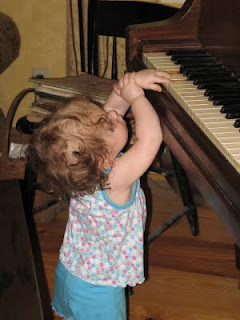 When daughter Melanie plays her guitar, Bella is fascinated. Unlike Bella's older brothers, who we helped raise, and who would have grabbed and broken the guitar strings in a boyish macho fit of excitement, she delicately strums the strings. It's similar to the way she gently taps the wind chimes on the porch and seems to delight in their sounds. When I used to lift Gordie up, he'd smash them with a fist and laugh at how they flip flopped all over. He didn't mean it to be an act of violence. He's just a boy. ;o

So, once again, thank you God (and Kodak) for freeing me up this summer. Thank you for the time I've had with my darling granddaughter, for the weeks of play and tenderness, for the first time I took her swimming in the pool and her little feet paddled so strong, for the strolls in the garden with Bella holding my finger toddling beside me, and for the time I've enjoyed when she got sleepy and lay her little head on my chest. I've grown so close to her, it hurts when she leaves.

Everything. It's life. And that's where stories come from. I'll end up using many of these observations as traits for Gus LeGarde's twin granddaughters (Celeste and Marion) and even for Sam Moore's grandson, Timmy. Almost every scene I've ever used with these children has been based on my real life: daughters, grandsons, and now Bella.

The next time you get stuck on a story, or feel that dreaded block coming on, just stop, get up, and live life for a while. Not only will you have participated in your own life (a very good thing!) but soon the words will pour out of you, I promise.


Watch for Part 3 in a few weeks. I'll be delivering my daughter back to grad school in Boston next week and visiting my family, so probably won't get to post next weekend. Have a wonderful few weeks!


***
Aaron Paul Lazar writes to soothe his soul. The author of LeGarde Mysteries and Moore Mysteries enjoys the Genesee Valley countryside in upstate New York, where his characters embrace life, play with their dogs and grandkids, grow sumptuous gardens, and chase bad guys. Visit his websites at www.legardemysteries.com and www.mooremysteries.com and watch for his upcoming release, MAZURKA, coming in 2009.
Posted by Aaron Paul Lazar at 9:33 PM

Email ThisBlogThis!Share to TwitterShare to FacebookShare to Pinterest
Labels: Bella