In 2006, I nearly ran out of vacation days early, due to too many unexpected family emergencies that claimed my vacation time. By September, only three precious days remained from my annual allotment.

I needed all three days to have Christmas week off. My employer gave us Monday and Tuesday for free, and with vacation to fill Wednesday, Thursday, and Friday, I would be able to secure a ten-day pass, counting weekends. Naturally, I guarded those three little days with my life. When appointments came up, I worked early or late to make up the time. When my daughter needed a ride to college for a few meetings, I took her to work with me after the visit, to avoid using my vacation. It was a hard fought battle, but I did it.

The time off was heavenly. I ate my way through pounds of Christmas cookies, made candy bars mysteriously disappear, and generally behaved in a shameful, glutinous fashion. It was a blast!

One of the best parts was being a kid again. I played superheroes with my grandsons. Repeatedly. Julian was Spiderman, Gordon was Superman, and I was awarded the role of Batman. I really wanted to fly, but the boys made me feel better by telling me about my Batmobile. In hindsight, it was kinda fun to drive the Batmobile while humming the Batman song. They were generous, however, and awarded me flying powers by knocking their knuckles against mine with appropriate sound effects. In no time at all, we were flying over mountains and oceans together.

We made play dough, rolling and shaping the blobs until our snowmen were six balls deep and our snakes almost fell off the table. When the boys’ great grandma dug out her mini-rolling pin and cookie cutters, it added a whole new dimension to the fun. Never mind that I had to crawl around on my hands and knees later and pick up a gazillion gobs of dough. It was worth it. 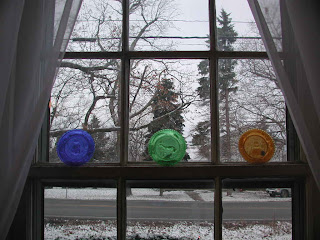 But my favorite activity was fishing.

Yes, fishing. In January, in Upstate New York, we sat out in the back yard and cast with their new kiddie poles toward a giant puddle that had formed beneath our Willow tree. Instead of the usual snow and ice, the winter season has been strangely mild, and it was warm enough most days to play outdoors.

Julian picked up on casting like a pro, but Gordie couldn’t quite figure out how to press the button and release at the proper time. So, we did it together. Watching the plastic fish bob through the water was delightful, even though I ended up having to rescue the fish from the apple tree branches several times. More often than not, I ended up standing on the lawn chair with a rake to pull the branches down, but it worked, and the fish were saved for yet another cast. 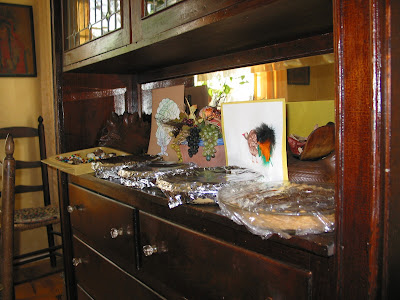 We cooked, too. Wonderful comfort food meals with homemade applesauce, fresh picked veggies like kale, collards, and sprouts, and mashed potatoes. My buddies helped, washing potatoes and adding ingredients. So what if the paprika sprinkled on the deviled eggs was a ¼ inch thick on some and missing on others? They tasted great and we scarfed them up in no time.

In addition to enjoying my grandkids fully, I was able to reconnect with two of my lovely daughters who came home for visits. We played cards, sat by the fire and talked, and took turns babysitting the two new puppies in the family. I also did lots of writing, caught up on correspondence, and actually completed some industrious cleaning projects that had been preying on my mind for months.

One of the best things about this time at home, however, was the lack of connectivity with the rest of the world. I was unplugged for ten days. No television, no radio, no newspapers. I retracted from all the violent sensational headlines, enjoying being cocooned by my excursions into superhero land and sleep hog heaven. I didn’t miss it. Not one bit.

Today I unplugged the Christmas lights. There was a twinge of sadness as I walked around the property, extinguishing the white lights that illuminated the yard for weeks, or the blue lights twinkling on the back porch. The two deer and Christmas tree flickered out with nary a tail swish or head bob – ready for next year’s display.

After four days of back-to-the-grind, I’m trying hard to hold fast to the memories and that lovely sensation of pretending to be retired. Sigh.

Now - how many days ‘til Easter?

Aaron, a great post and as always super pictures.

Thanks, Steve! Great to hear from you.

Hope all is well in Deutchland. ;o) Wiedersehen!

You have such a Norman Rockwell kind of life, Aaron, and so much to be proud of working so hard for. I know sometimes it can be hard to see when you're up close and personal with it, but to the rest of us, it sounds so ideal. Good on you!

I've been on a media vacation ("unplugged") for quite some time now. What's the President's name again? Ronald something or another, isn't it? :)

You are blessed, my friend. Glad to hear you had such a wonderful holiday!

(Word verification is oipimpl. I better make a Clearasil run!)

Thanks, Val. Well, life is certainly not ideal, but I tend to focus on the good stuff. I try to ignore the severe disabilities in the family and the lack of (cough) funds. There is enough good stuff to more than make up for all of that, and most importantly of all - I have the love of family. They make it worth while, no matter what happens!

Thank you, Jude! I missed you and am glad you're back, too!