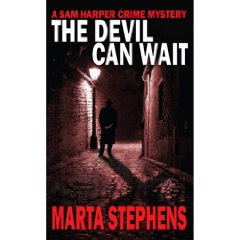 
Looking for a deliciously convoluted tale that will twist its way through your brain and keep you up late into the night? Look no further, for Marta Stephens has just released the second book in the Sam Harper crime mystery series, The Devil Can Wait.

Stephens’ debut novel, Silenced Cry, was addictive, propelling readers into the action from page one and corkscrewing through a wild ride of corruption and abuse. Unlike many “seconds” in a series, The Devil Can Wait does not disappoint, and expands Detective Sam Harper’s world from the fictitious seaside town of Chandler, Massachusetts to the steamy jungles of Columbia and through shocking revelations in the Vatican itself.

A dark history precedes the bitter tale of a cursed black pearl ring, whose protectors and seekers have killed to keep its secrets for centuries. Now, just months before the planets align in what is believed to be the sign of a long awaited prophecy, the ring lands in Harper’s back yard, triggering villainy and murder. Murders, that is. Four boys wash ashore the icy Chandler beaches, and Harper’s up to his eyeballs in corpses with few leads and increasing pressure from his captain and the press.

As if multiple seaside murders aren’t enough to drive an already sleep-deprived police force to the brink of exhaustion, a sleazy pawnshop owner and elderly history professor are found dead within days. Is spunky local journalist, Jennie Blake, tied to these murders? If so, what’s she trying to hide? And why can’t Sam stop thinking about the gorgeous brunette in spite of his best intentions?

Stephens has skillfully detailed police procedures in a realistic fashion, a task not easy for one who hasn’t worked a real life police investigation. But on top of this, the author has woven intriguing subplots with a love entanglement that thrusts the story forward to its climatic end. The sexual tension between Harper and reporter Jennie Blake is natural and sublime – adding icing to this already delectable confection of supernatural elements, grisly murders, and the stoic talent and courage of one very likeable cop. Don’t take my word for it – buy it and read it today.

Stephens has hinted at a third in the Sam Harper series. We’ll wait with bated breath, in anticipation of her next taut thriller.

Aaron Paul Lazar writes to soothe his soul. The author of LeGarde Mysteries and Moore Mysteries savors the countryside in the Genesee Valley in upstate New York, where his characters embrace life, play with their dogs and grandkids, grow sumptuous gardens, and chase bad guys. Visit his websites at http://www.legardemysteries.com/ and http://www.mooremysteries.com/ and watch for the fourth book in the LeGarde series, MAZURKA, coming in fall 2008 from Twilight Times Books.

Double Forté is the founding book of the LeGarde Mystery series and was released in November, 2004. Upstaged followed in October, 2005. His third, Tremolo: cry of the loon, was released via Twilight Times Books in November 2007. Mr. Lazar is currently working on his thirteenth book, The Aviary. The first book of his paranormal mystery series, Moore Mysteries, will be released in early 2008, along with Mazurka, the next book in the LeGarde mystery series. He is a regular columnist for FMAM (Futures Mystery Anthology Magazine), Mysteryfiction.net and has been published in Great Mystery and Suspense magazine and the Absolute Write Newsletter. Contact him at: aaron.lazar@yahoo.com, visit his blog at murderby4.blogspot.com, aaronlazar.blogspot.com, or stop by his websites at http://www.legardemysteries.com/ and http://www.mooremysteries.com/.

Posted by Aaron Paul Lazar at 9:48 AM

My pleasure, Marta. As you know, Sam Harper is one of my favorite characters!