Have you ever heard the adage, "Write like you talk?"
I've run across this bit of advice off and on during my career, whether it was in writing skills articles, or from colleagues who had a "eureka!" moment of their own. One mentor told me he didn't write one really good book until he actually put the advice into practice. And let me tell you, it worked. It really worked. I devour his mysteries.
I think "writing like you talk," is another way to accomplish "pure" writing. Simple, yet profound writing. Know what I mean?
I'm referring to words that flow without stuttering in your brain or tripping you up in the middle of an action scene, words that tell a story almost in an invisible way.
Ever had the experience where you're reading a book and you keep paying attention to the actual writing? Okay, okay. I know most writers pay close attention to the writing in every book. But there are superb books whose stories flow so fast you can't stop turning the pages. They aren't always elegant, like Dean Koontz's Odd Thomas series (those books make me weak in the knees, they're so beautifully crafted!), yet they propel you forward so the movie plays in your mind and you don't notice the words.
There are others, however, where you can't help but notice the writing, and not in a good way. Sometimes this is a result of writers who are just learning the craft, who are trying way too hard. And sometimes it's just plain old bad writing. These writers want to dazzle us with their vocabulary, their command of the language, or their brilliant analogies. Sometimes it's just too much. One of the first things I learned was to CUT, CUT, CUT. My early prose was filled with glorious adverbs and adjectives which described in no uncertain terms the visions I saw in my head. But they bogged down the story. After all that, after learning to hone and refine and smooth out the sentences, I'm STILL learning to cut the excess and just tell the damn story!
Of course, one must have balance. In literary mysteries, for example, there is room for a bit of poetry, or a scene described in such luscious terms it makes the reader salivate for a meal, or a dip in a lake, or a romantic moment with your character. (You wouldn't believe how many marriage proposals Gus LeGarde has had! LOL!)
Once you've learned to simplify the prose (Remember my resolution for 2009? Simplify!), then it's okay to spice it up -- judiciously -- so your own style can shine. Perfectly chosen verbs, sparing yet brilliant analogies, or dead-on-dialogue will help you carve your own niche in your genre.
I just finished a book that drove me to write about this topic. As I read, I heard the author's voice in my head. I recognized the natural style and lovely Southern accent, because I've heard her radio show and have chatted with her. And it worked, it really worked.
Here's the review I wrote for Kim Smith's Avenging Angel: 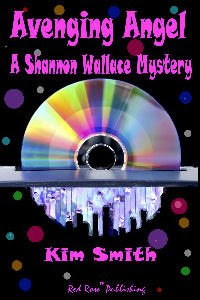 Avenging Angel
Review by Aaron Paul Lazar
A great read doesn't have to be fancy, full of literary allusions or deep musings. Nor does it need a ritzy setting, plots that twist your brain into a pretzel, or elite protagonists.
What a great read does need is a story that moves, characters who linger in your mind, and a voice that calls you back to its pages. Avenging Angel by Kim Smith accomplished all three.
Smith has written a suspenseful cozy mystery set in the south in a small lazy town. Shannon Wallace, a spunky, smart, and all-American young woman, is at the brink of disaster. Dumped by her beau, fired from her job, and plunged into the middle of a killer nightmare, Shannon's pluck and smarts carry her forward in a tidal wave of terror that will get your heart pumping in this delightful page turner.
When Shannon's boyfriend is murdered hours after he breaks up with her, she discovers their private video collection is missing. Problem is, the star of the intimate show is Shannon, and she'll do everything in her power to retrieve the embarrassing disks.
The author knows how to write. But best of all, she knows how to write like she talks. It's not easy to accomplish, as most debut authors tend to fall into the trap of using words that sound good but don't fit, or making a sentence far more complex than it needs to be. Smith's simple, straightforward, and quite endearing style is what drives Avenging Angel forward, with hints of colorful Southern dialect and engaging dialogue.
That said, there are select moments of literary prose that shine, as in the following excerpt:
"August in the Mid-South is like summer in the tropics. The crepe myrtles bloom in fuchsia and pink, and old people perch like lazy flies on white wicker swings and cane chairs. In every neighborhood, folded fans gently wave at the heat, and everyone talks about the weather. No one moves too much, or too fast, thanks to the humidity, which turns the still air into a sauna-like atmosphere even before daybreak. The firmest hair spray is reduced to damp stickiness, the best-laid plans are set-aside until evening, and the most even-tempered person will contemplate murdering their friend."
By contrast, take a look at this wonderfully simple, yet engaging, segment:
"My dreams were a mish mash of colors and snippets from my life. I saw myself as a child, orphaned. I relived the pain that accompanied it until it nearly drowned me and woke with tears on my face. The birds of summer played somewhere outside the window and all the sounds of nature seemed intensified as though reassuring me I was still alive."
As much as I enjoyed the plot line-straightforward, tense, great suspense-it was the relationships between Shannon, Dwayne, Salvatore, her elderly aunts, and the broad cast of suspects that sold me.
I was most pleased that Shannon didn't fall into the arms of the handsome local detective, because that would have made the work too predictable, trite, or Lifetime Movie-ish. No, Shannon held her own, wasn't pushed around by the cops, and survived numerous attacks by a very frightening assailant. This woman-while she does show very real emotions that ring true-won't be bullied by anyone. And when Dwayne helps her buy and learn to use a handgun, it may be the key to her survival.
Smith, "a true blue southern gal who was raised on black-eyed peas and cornbread," promises sequels to her captivating world. See more at her website, www.mkimsmith.com.

Yes! and that "author inserting him/heself into the work" thing - where an author will use a device to get somewhere -it's like a neon sign flashing.

It's that artificial reality we must stick to - it's "real" it's real to the characters and their world, yet, is of course, artificial because we are creating this world.

I opened up one of my first long short stories the other day - one from years back - aw lawd! I laughed at the adjectives and the stilted dialogue...teehee!

Aaron Paul Lazar said...
This comment has been removed by the author.
10:49 AM

Thanks, Kat! I'm having posting problems today. At first it showed four versions of the same comment I added, then when I deleted one, they all disappeared. Oh, my. What a day! Thanks for stopping by. ;o)

Great review, Aaron. Meanwhile, I heard from Balto about your recent job loss. Sending hug. I have absolute faith that a new door with something beautiful behind it will open for you soon.