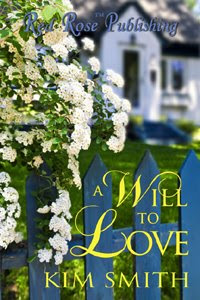 
A Will to Love
Review by Aaron Paul Lazar


I’ve never read a romance. Honestly. But I ordered Kim M. Smith’s ebook, A Will to Love, because I fell in love with her silky smooth writing style when I discovered her first book, a cozy mystery entitled Avenging Angel. I ordered A Will to Love this morning–while recovering in bed from a hospital stay–and read it in one, luxurious sitting.

How many men actually read romance? I have no idea. I suspected the content would only appeal to women, but I was wrong. Smith’s strong characters and the emotions they evoked wove magically together the moment I met Benton Jessup and Kitty Beebe.

Jessup, a man haunted by the loss of his lifelong soul mate Carla, tries to keep his southern inn afloat. He cooks meals for his guests with ease, and has even been written up in the local gourmet press. But his heart’s not in it. He aches for Carla and plods through life in a haze of sorrow.

Enter Kitty Beebe, a romance author from Ireland with fiery gold hair and disturbingly beautiful blue eyes. One would expect this setup to result in a predictable rescue of poor Jessup, but it doesn’t go quite so easy for him, which adds to the luscious tension. Kitty, a complicated lady, becomes besotted with Jessup, but isn’t sure she’s ready to rescue him for a lifetime.

Another character I fell for was “The Inn” itself. Set in the lazy southern countryside, its beguiling charm oozed from the pages. I want to go there. I want to live there. And I wouldn’t mind being Benton Jessup. At least in my dreams.

In this passage from A Will to Love, we discover the depth of Jessup’s pain:

“But they had to come back to Mississippi and the life that she wanted.

At least the memories would remain forever. Maybe that was why he had agreed to the Celtic cross now adorning the headstone. Its gray granite cast a faint shadow on the small bundle of pansies he laid on the grave. He didn’t speak. He wouldn’t know what to say anyway. His whole life, past, present, and future now rested beneath the fresh grasses growing over the mounded earth in the little cemetery on their land.

She would understand his stalwart silence. She had known him through and through.

There would never be another woman who would be that close to him.

He’d make certain of it.”

The only issue I could find with the novelette was its requisite length. Of course novelettes are short. But I hated it to end and wanted to learn more about Kitty’s past, the things that led her to a troubled sort of hesitancy to love. I yearned for more of their life at The Inn and in the cottage in Ireland. I guess that’s the nature of a novelette, and of course, the skills of a fine writer. They always leave you wanting more.

Smith, “a true blue southern gal who was raised on black -eyed peas and cornbread,” promises more books, including another romance short, Love Waltzes In due in the Forever Young Anthology at Red Rose Publishing, September 2009. The second Shannon Wallace mystery is due in December, 2009.

See more at her website, http://www.mkimsmith.com/.
Posted by Aaron Paul Lazar at 5:33 PM