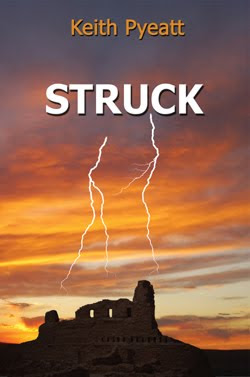 
The books I count among my favorites are those whose well-drawn characters linger with me for days, or even weeks. They are the stories that rise above the norm, whose scenes are painted with such skill that I feel a deep sense of place, and suffer a bit of separation anxiety when I approach the last page and realize it’s almost over. Struck, Keith Pyeatt’s debut paranormal thriller, was such a book.

It’s been two weeks since I finished the book, and Barry Andrews, Pyeatt’s protagonist, still haunts me. Barry’s life was preordained the minute his mother was struck by lightning when he lay curled in her womb. And when lightning finds him again at Albuquerque’s Petroglyph National Monument, a series of predestined events are put into motion. The energy now stored within this likeable young man stir powers unimagined.

Against a backdrop of ancient pueblo ruins, slumbering volcanoes that unpredictably awaken, and bizarre disturbances in Chaco Canyon, Pyeatt introduces characters with great depth and a subtle touch of humor. After being struck, Barry begins to notice bizarre effects. His palm, now marked by a symbol that pulses electric blue on occasion, helps him connect to other souls and carries messages to him about their sadness or fate. He knows when someone is about to die, and can help them peel the layers of pain away so they’re free to move on to the next world. Sleep eludes him, and while he stumbles through his job in a daze, strange sensations continue to build within him.

Inexplicably drawn to Native American tribal elder Walter, Barry is invited into his mystical world, from the village of Amitolita where Walter and his wife live, to kivas in the Amitole Pueblo, to ceremonies in a sweat lodge where sage is strewn across the floor and piñon-infused water is boiled to scatter on hot stones to create cleansing steam. Pyeatt’s writing style is easy to swallow, yet innovative with strong poetic influences.

“It only took a moment until he got the sensation of being folded into a deep mixture of past and present that carried him far away from the kiva, far away from his body. He was cocooned somewhere, safe and warm and dark, yet all around him dozens of individual battles raged. Barry only sensed them, but it was enough to recognize their struggles. Life fought death, winter resisted spring, and chaos tugged at order.”

The story plunges ahead, and we discover tribal elder Walter spent time training and working with Thomas Maguire, a browbeaten young man raised by a forceful, cruel grandfather. The tribal elder was driven to “prepare” this young man for a yet unnamed climatic event seen only in his spirit-visions, yet doubts have been mounting about the validity of Thomas as the earth’s savior. The future holds something monstrous and potent, and Walter realizes he plays an integral role in its outcome.

When a bizarre power transfer ceremony based on Anasazi’s ancient history drives supernatural powers into Thomas’s being, he gradually turns from a man with a tumultuous and fragile psyche who simply needs to be loved, into a monster. Walter reluctantly recognizes this, and transfers his focus to Barry, the true warrior he’s been waiting for all his life. Jealousy pushes Thomas further from his true nature, building inside him with an uncontrollable black force. Destiny calls for a showdown between Barry and Thomas, and the book rockets toward a surprising culmination.

Several of Pyeatt’s characters are gay, and the author paints them with professional, loving brush strokes. Barry’s sidekick Martin, an overweight waiter at Los Cuates Mexican restaurant, is diagnosed with a life threatening heart condition that leads to a torturous diet. Loveable and real, Martin becomes a clear favorite from the start and plays an important supporting role.

The story and characters are mesmerizing, but it was actually the writing that made me sit up and take notice:

“Pain pierced his lungs, as if the air he breathed had alchemized into something powdery and rough, toxic and thirsty. The agony spread. He couldn’t stop it. Every cell in his body pulled at the poison, needing it, expecting it to provide oxygen as before.”

See what I mean? Keith Pyeatt’s books are available through all bookstores, including Amazon.com, or purchase autographed copies via his website.

Aaron Paul Lazar writes to soothe his soul. The author of LeGarde Mysteries and Moore Mysteries savors the countryside in the Genesee Valley in upstate New York, where his characters embrace life, play with their dogs and grandkids, grow sumptuous gardens, and chase bad guys. Visit his websites at www.legardemysteries.com and www.mooremysteries.com and watch for Healey’s Cave, the debut book in the new paranormal Moore Mysteries series, coming in April 2010 from Twilight Times Books.

Double Forté is the founding book of the LeGarde Mystery series and was released in November, 2004. Upstaged followed in October, 2005. Lazar’s third, Tremolo: cry of the loon, was released via Twilight Times Books in November 2007. Mr. Lazar is currently working on his fourteenth book, Don’t Let the Wind Catch You. The fifth book in the LeGarde Mystery series, Firesong: an unholy grave, is scheduled for 2010 release. He is a regular columnist for FMAM (Futures Mystery Anthology Magazine), Mysteryfiction.net and has been published in Great Mystery and Suspense magazine and the Absolute Write Newsletter. Contact him at: aaron.lazar@yahoo.com, visit his Writer’s Digest Best 101 websites blog at murderby4.blogspot.com, aaronlazar.blogspot.com, aplazar.gather.com, or stop by his websites at www.legardemysteries.com and www.mooremysteries.com.
Posted by Aaron Paul Lazar at 8:09 PM