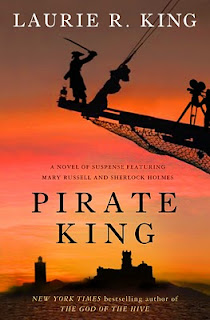 I have long loved Laurie R. King’s books, from my first taste of her writing in THE MOOR, to Kate Martinelli’s dark mysteries, including A GRAVE TALENT. Without fail, I preorder each new release, looking forward to the hardcover arrivals to treasure and store on my bookshelf. Lately, I’ve also ordered the Kindle versions, just to have the books close at hand when a stray chance to read presents itself.

Mary Russell, originally an apprentice to Sherlock Holmes and now his wife and partner in solving puzzles around the world, is featured in these books with her erudite and delightful husband, in a world of high culture and gentle civility. Of course, things are not quite so civil when they run across villains. When that happens, all bets are off.

The series is most appealing because of its intellect combined with delectable humor, particularly shown through the pithy dialogue of husband and wife. Mary Russell’s voice is strong – profound, most definitely British, and delightfully independent. Her relationship with Holmes, while they dash across the globe to solve mysteries and rescue innocents, is what hooked me from the beginning, particularly its dry humor and subtle eroticism.

What amazes me most about this author is her ability to set a story in the voice and time of the early 20th century, in such a way that readers feel an integral part of that era. And yet, she also has perfected the art of writing contemporary genre crime stories, such as TO PLAY THE FOOL and the other Kate Martinelli mysteries. I’ve loved them all, including the standalones, but what astounds me the most is King’s ability to switch between these distinct and very different writing styles so effortlessly. Both series have garnered high awards in the literary world, and both have found space on my bookshelf.

About the new book:

In THE PIRATE KING, the eleventh Mary Russell book, Russell is challenged to uncover secrets in a nest of villainous characters spanning the misty shores of Lisbon to the heady-scented harems of Morocco.

Inspector Lestrade of Scotland Yard convinces Russell to go undercover in the film company, posing as an assistant to the director. What happened to the missing secretary? Why were her shoes found near a ledge, but no suicide note? And what about these rumrunners, cocaine dealers, and arms sellers who seem to be linked with every silent Fflytte film that’s ever been produced?

With Holmes unavailable, Russell is rushed undercover in this colorful, crazy world of silent filmmaking, where she is immediately put in charge of a bevy of blonde actresses and is the primary peacekeeper and runner of errands.

A band of real pirates is hired in Lisbon to act in “the film about a film about pirates” loosely based on Gilbert and Sullivan’s Pirates of Penzance. (Although quite complex, the story within a story didn’t bother me, since one of my own books involves a deeply layered story with multiple actors, their roles in a musical, and the story behind the story that inspired the musical. I was used to thinking in these convoluted terms!)

Vibrant characters, subtle hints, questions that layer one upon the other, they weave a tight and fascinating tapestry. Suffice it to say that a complete plot description would take up too much room here. You can read more details in the product description on Amazon, or on King’s website at http://www.laurierking.com.

As an aside, I did have one minor complaint about PIRATE KING. I missed Sherlock Holmes in the first two-thirds of this book. Mary writes letters to him, but he doesn’t write back, so we don’t hear his voice or see him for much of the story, and I yearned for their witty repartee. He does finally show up, however, and it’s at that point where the suspense and action really pick up. Yes, PIRATE KING has a different feel from the previous novels, but is enjoyable in its own right.

Mary Russell’s voice is distinct and unique; it’s what stamps the eleven books with King’s signature, book after book. As an example, see the following excerpt from a letter penned to Holmes.

“It may not have escaped your notice that this missive contains a dearth of data concerning the true reason for my presence, namely, a missing secretary and the illicit selling of cocaine and firearms. Perhaps that is due to the circumstances of my employment, which is rather that of a person attempting delicate surgery whilst standing in a hurricane.

It is Russell’s sardonic wit exemplified in lines like this that always make me laugh out loud.

Some of the lovelier aspects of PIRATE KING—aside from the fun of meeting all of the actors, pirates, and staff—are the delicious descriptions of Lisbon and Morocco. Exotic and intriguing, the sights, sounds, and aromas tantalize. It’s clear that the author has been in these locales (you can read about it on her Mutterings blog at www.laurierking.com).

In addition to the intricately woven plot, King paints delightful portraits of her featured characters, such as Mr. Pessoa, based on a real Portuguese poet from the same time in history.

“All this talk about pirates had made Mr. Pessoa’s gaze go far away. Two lengths of ash had dropped unnoticed as his monologue unfurled. Then he looked at me as if in expectation of an answer, to a question I could not begin to recall. I felt an absurd urge to lay my head down on the table and go to sleep. Or to weep.”

One aspect of King’s writing that thrills me is the use of certain verbs, such as “…his monologue unfurled.” How appropriate (since we’re reading about sailing and sails unfurling), and what pure poetry. I love the thought of words unfurling from a poet’s lips.

Russell’s humor continues, never failing, even in the most dire situation.

“It was getting on to eleven o’clock; I had not slept a full night since leaving London; I had not eaten a full meal in that same time. I was exhausted and cold and so hungry that the plate of fly-specked objects on a shelf (pies? Boiled eggs? Bundled stockings, perhaps?) made my mouth water.”

I still laugh when I picture whatever it was on that shelf. Eggs, pies, or stockings?

My favorite line in this entire story, however, again comes from one of Russell’s letters to Holmes.

“Holmes, I am awash in a sea of megalomaniacs.”

And indeed, she was. Surrounded by film directors, actors, pirates, poets, and spies, this staunch and feisty young woman took on more than her share and made Holmes and her readers very proud.

If you begin to read the book and wonder where the threats are, where the mystery is, when the action will start, don’t despair. Although the first section is a bit different from other Mary Russell books (albeit enjoyable in its own right), the last pages will woo you with dazzling tension, heart pounding action, and wonderful imagery. I’ll never forget the image of Russell hanging outside a Moroccan jail cell on a silk rope thirty feet above the cobblestones below, having in-depth conversations with the prisoner inside; it was sheer delight.

If you haven’t read a book by Laurie King, please check them out now. Whether you’re a modern day crime aficionado or a British mystery fan, both genres will fill your days and nights with superb writing and entertainment. You can find all the books on her website.