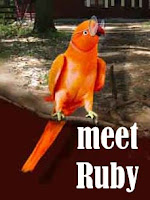 Have you ever done a character interview?

It can be quite the lark. I've had interviews with my characters Gus LeGarde, Oscar Stone, and Siegfried Marggrander. Today, however, I thought it would be fun to lighten up, and I'm sharing the recent interview done a few weeks ago on Pat Bertram's blog. Ruby's rather full of herself, but I hope you'll get a chuckle out of her answers, anyway. ;o)

What happens when a parakeet named Ruby gets an unexpected mind-meld with Marcella Hollister’s quarrelsome mother, Thelma? When Thelma’s kidnapped, Marcella must find her - somewhere in the six-million-acre Adirondack Park. Marcella’s perseverance coupled with Ruby’s new talent offer the only hope for rescue, until the shocking truth is revealed.
***
Aaron Paul Lazar writes to soothe his soul. An award-winning, bestselling Kindle author of three addictive mystery series, Aaron enjoys the Genesee Valley countryside in upstate New York, where his characters embrace life, play with their dogs and grandkids, grow sumptuous gardens, and chase bad guys. Visit his website at www.lazarbooks.com and watch for his upcoming Twilight Times Books releases, ESSENTIALLY YOURS (MAR 2012), TERROR COMES KNOCKING (FEB 2011), FOR KEEPS (MAY 2012), DON’T LET THE WIND CATCH YOU (APRIL 2012), and the author’s preferred editions of DOUBLE FORTÉ (FEB 2012) and UPSTAGED (JUNE 2012).
Posted by Aaron Paul Lazar at 8:11 AM