Review for The Serpent's Bite by Warren Adler

Warren Adler's team asked me to do an advanced review for his newest blockbuster, THE SERPENT'S BITE. It's just out now and you can order it by clicking on the link on the left hand side of this page.

Honored by the request, I thoroughly enjoyed this somewhat dark piece of literary fiction. See what you think, and let me know if the review below strikes any questions or chords. We love comments here, so don't by shy. ;o)
Aaron Paul Lazar
www.lazarbooks.com 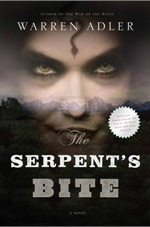 The Serpent’s Bite by Warren Adler offers raw escapism rooted in the wild environs of Yellowstone State Park. This riveting novel pits nature against the tense dynamics of a very unnatural family, drawing fascinating conflicts between right and wrong, real and counterfeit, power and subservience, abuse and rebellion.

George Temple, widowed several years earlier, deeply mourns the loss of his first wife, the mother of his two children. Over time, much to his surprise, he meets Muriel, a woman who understands and comforts him. Now he hopes to gingerly introduce the idea of his upcoming marriage to his two estranged children, Scott and Courtney, and has planned a grand trail riding adventure during which he will divulge his news.

George hopes to recapture the innocence of a time when he and his young family took a long guided trail ride through Yellowstone. He contacts his children, who have all but abandoned him, and they reluctantly agree to retake the trip of their childhood with the same guide who hosted them years ago.

Courtney and Scott are spoiled, ungrateful offspring. Scott—weak and easily pushed around by his sister—still holds some affection for his father, although he is furious that George has recently declined to finance the latest in a long string of unsuccessful ventures.

Courtney—egocentric, brutal, and completely without conscience—is focused only on her unsuccessful career as an actress and nothing will stop her maniacal grab for her father’s fortune. This woman is the ultimate sociopath housed in a goddess’s body, and her scheming ways make hardened criminals look tame.

In addition to the intricate layers of subterfuge in this miserable family, horrible, dark secrets simmer in their past. Flashbacks include insight into a relationship most shocking. I won’t reveal the participants or nature of the liaison, as it’s one of the surprise elements of the story.

One of George Temple’s greatest disappointments in this adventure has to do with the trail guide. Decades after their first trip, Harry has succumbed to alcohol and is constantly inebriated. The Mexican trail hand, Tomas, enables his boss’s habits by burying bottles of liquor ahead of time near the campsites. Although Harry has some redeeming qualities, such as his deep and respectful knowledge and love of nature, Temple finds him intolerable because of his treatment of Tomas. With prejudice and arrogance, Harry orders the trail hand around like a slave, hurling racial epithets at every opportunity and taunting the quiet man with regularity.

Mr. Adler’s understanding of abnormal relationships is insightful and brilliant. Some scenes made my skin crawl, and others saddened me deeply. I felt great empathy for George, who tries so valiantly to reunite his family. Of course, these reactions to strong characters parallel the suspense and tension embedded in the story from page one. Will George win the affection of his children again? Will the group make it out of the park safely? What about the grizzlies and mountain lions lurking in the background? Can there be a positive outcome?

This tense and often shocking journey through nature’s spectacular canyons and mountains will hold your attention and keep you reading long into the night. A new classic has been born from the prolific Mr. Adler!

Recommended for adults only by Aaron Paul Lazar, www.lazarbooks.com.