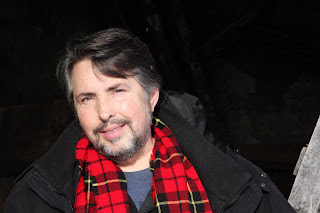 I hope this finds you all healthy and happy. Spring has finally sprung in our neck of the woods. The birds are singing like mad all morning, and color is popping out all over, with tulips and daffodils blooming everywhere.

I wanted to share the first chapter with you from my newest LeGarde book, Voodoo Summer.  For those of you who've read the other ten books in the series, this one actually takes place in 1966, two years after Tremolo: cry of the loon and one year after Don't Let the Wind Catch You, both which feature Gus as a young man. In addition to a couple of nasty bigots who threaten Gus's family and way of life, there is the joyful summertime boyhood you've experienced with the previous books. You also get to see what happened to Siegfried all those years ago that changed his life forever. I loved writing this one, and will miss my writing time in the early mornings when I was able to "be" thirteen again. ;o) Hope you enjoy it! And by the way, you can read this easily as a standalone - all LeGarde books are written to be enjoyed in any order. 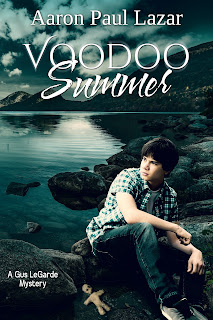 “We made it.” My father eased our old station wagon over the rutted dirt road and turned into the Loon Harbor parking lot. The twelve-hour trip from East Goodland, New York to South Belgrade, Maine was finally over. He glanced at me in the rear-view mirror with a tired smile. “I’ll bet you’re glad we’re here, Gus.”

“Yes, sir.” I shoved open the door and escaped into air fragrant with balsam. Shadow hopped out behind me, his beagle nose already leading him in frantic circles around the mammoth pine trees shading the lot.

A long white building with red shutters lay just below us. One end housed the office, where my grandmother kept the camp records. The other end featured a huge kitchen where my grandfather and his staff of waitresses bustled to feed the camp guests three hearty meals per day. In the middle of the office and kitchen sat the spacious knotty pine paneled dining hall.

I caught the aroma of homemade donuts and smiled. Gramps was already frying them for me. I knew the donut holes would have my name on them.

We’d left at four in the morning, and now at just after four in the afternoon, I stared longingly down the hill toward the lake glinting green in the sun.

I expected an answer like, “Later, son. We need to say hello to your grandparents,” or “Help us with the suitcases first, honey.” Instead, she gave me a sweet smile. “Sure. I’ll meet you down on the dock with a towel in a little bit.”

I didn’t hesitate. Today I wore shorts, an old tee shirt, and flip-flops, and I didn’t intend to waste one more second changing into my swimsuit. The shorts would do fine.

“Thanks, Mum.” Before my father could take issue with this unprecedented decision, I kicked out of my flip-flops and took off at a run, dashing down the hill as fast as my thirteen-year-old legs would carry me. The sandy path was crisscrossed with embedded logs, and I leapt high over each one, loving the rush of air against my skin. I felt the lake calling me, and imagined the cool water encircling my body.

I streaked past the shower house, three more cabins, the communal living room, and the sun porch. I pounded over the dock, stripping off my shirt as I ran. Bam, bam, bam, I ran across the weathered gray boards. Finally, I reached the end. I flew into the air, legs kicking and arms spread wide. Into the cool water I plummeted, making a titanic splash. Beneath the surface, a trail of yellow bubbles floated upward. When my feet hit the soft sand, I pushed up and burst into the warm July sunshine, arching to float on my back and gaze at the blue cloudless sky.

I pulled upright and grinned, glancing around for her. “Elsbeth?”

Beneath the dock, her sweet face appeared, dark curls plastered to her cheeks. My friend rebelled against bathing caps, unlike all the other girls at camp, and let her hair go wild in the water. I didn’t blame her. The darned things looked awfully uncomfortable.

I swam closer to her. “Hey. When did you get here?”

“Monday,” she said in her German accent. “We’ve been dying for you to arrive. I have so much to tell you, Gus.” Her dark eyes flashed in anticipation.

“Ja,” a voice came from up on the dock. “Where have you been, anyway?” Siegfried, Elsbeth’s fraternal twin, smiled down at me, his long blond hair even more enviable than it was at the end of school last week. Wet bangs plastered his forehead and in the back, his hair hung down an inch below where his collar would be. He backed up a few steps and then took a running leap into the water, almost landing on me.

I waited for him to surface, and then scooped water toward him, splashing his face with an unbridled laugh. “My father had to train the new guy to run the pharmacy. It took longer than he planned.”

Before I could respond, Elsbeth began feverishly dog paddling toward shore. Siegfried, taller and leaner, easily pulled past her, stroking hard toward the rope swing that dangled from a cluster of white birch trees. It never ceased to amaze me that twins could be so different in appearance and personality. Elsbeth—short, petite, dark, and wild—was the complete opposite of her brother, who sported blond hair, startlingly blue eyes, and who boasted an analytic, brilliant mind.

I began splashing toward the shore behind them, anticipating the giddy feeling of the rope swing flying out over the water, and the delicious drop that followed. “Hey, wait for me.”

I scrambled onto a granite boulder to climb up the mossy ledge where I joined the twins. Sig poised there, ready to soar over the water on the swing.

“Geronimo!” he cried. With legs flailing, he leapt from the porch.

I caught the excitement in Elsbeth’s eyes, and beamed at her. We’d been grounded at home last year because my father’s intended substitute to run his pharmacy became seriously ill, and instead of swimming and boating we’d spent our summer on our horses, riding through the woods. Not that it was a bad way to spend the season. In fact, we’d had an amazing adventure, had met a young Indian spirit named Penni, and had made some lifelong new friends.

In spite of the wonderful time we’d had, I’d still missed the lake.

“Me, too,” Elsbeth said with a giggle. “But this summer we’ll make up for lost time, Ja?”

Siegfried landed with a respectable splash and the rope came swinging back toward us.

She accepted it gratefully. “Danke, Gus.” With a delightful laugh, she gripped it tightly, jumped into the air, and sailed over the water.

The Marggrander family had escaped from East Germany eight years ago when the twins were just four years old, and they still used some German words in their daily speech. I’d also learned a few key phrases and sometimes I found myself saying “danke,” instead of “thank you,” and “kein problem” instead of “no problem.”

Siegfried had already climbed up and stood dripping beside me. “It’s good to see you, Gus.”
I fake punched him. “You, too. It was pretty lonely without you guys at home the last few days.”
He grabbed the returning rope and handed it to me. “Your turn.”

With gleeful anticipation, I wrapped my hands around a thick hemp knot and swung out over the water, letting go at just the right time. After a delicious, stomach twisting fall, I plunged into the water, feet touching the sandy bottom in seconds. I popped up again, grinning from ear-to-ear.

“Watch out below,” Siegfried called.

I swam to the side to get out of his way, and then hurried back to shore for my next turn.

***
Voodoo Summer
Every family has its secrets…

Summer, 1966: For thirteen-year-old Gus LeGarde, summertime always means Loon Harbor, his grandparents’ idyllic fishing resort on Great Pond. The season is a grand tradition of swimming, boating, and new adventures with his best friends, twins Siegfried and Elsbeth. But this summer, everything changes when a new lodge down the shore threatens the resort—and triggers a chain of events that will transform Gus and his friends forever.

Customers are leaving Loon Harbor in droves for The Seven Whistles, owned by the wealthy LaFontaines. The Baton Rouge family arrives with better amenities and a much larger staff—among them Wilhelmina “Willy” DuPont, a young black girl whose family works for the LaFontaines. Gus and the twins immediately bring Willy into their circle…but their friendship is soon challenged when events at The Seven Whistles take a terrifying turn.

A mysterious figure haunts the windows of women and young ladies at both camps, escalating from peeper to dangerous stalker. Then the LaFontaines’ spoiled and demanding daughter goes missing—and Willy’s innocent older brother is arrested.

Gus soon discovers that dark secrets lurk beneath the surface of the LaFontaine family, and the stakes are higher than ever imagined as they race to exonerate Willy’s brother and find the real perpetrator—before he finds them.

Posted by Aaron Paul Lazar at 9:52 AM