Free Excerpt: The Disappearance of Billy Moore by Aaron Lazar 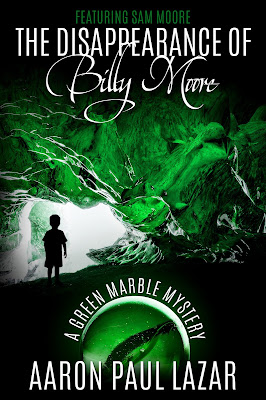 I thought I'd share an excerpt from book 1 in the Green Marble Mysteries today. (It's on sale for 99 cents through Sept. 4th, so if you enjoy the read, grab the deal at 75% off. ;o))

The Disappearance of Billy Moore

Here's the set up:

Fifty years ago, Sam Moore’s little brother Billy vanished without a trace—leaving Sam with guilt that haunts him to this day.

Fifty years with no body, no leads, and no answers. Until now.

When Sam unearths a mysterious green marble buried in his garden, he’s shocked to find himself transported back in time—to Billy. Whisked between past and present with no warning, and receiving only glimpses of their childhood, he struggles to unlock the secret of his brother’s fate.

But the marble isn’t the only secret the ground holds. Further digging uncovers human remains—the legacy of a serial killer who’s been targeting one boy every five years since Billy vanished. The next five-year mark is coming up fast. And now, Sam’s grandson may be in the killer’s sights.

Can Sam tie the past with the present and unravel the mystery of his brother’s disappearance—before the killer strikes again?

“Want some more, Sam?”
Sam wiped the napkin across his lips and pushed back from the kitchen table.
“Thanks, but I'm stuffed. How ‘bout you? There's a little asparagus left. I could make you another piece of toast.”
He walked past her wheelchair with his dirty dishes.
Rachel smiled and patted his hand when he passed. “No, I'm fine.” She paused, watching him. “Stop that, now.”
He reached the sink and looked over his shoulder. “Huh?”
She motioned toward the sink. “I'll do the dishes. I'm not helpless, you know.”
He kept working and smiled. “I know, but now that I'm retired, I want to pitch in more.”
A look of surprise crossed her face, followed by a frown. Sam returned to the table to collect the glasses and pan of asparagus.
“What? What’s wrong?”
She brushed aside her graying bangs.
“Much as I love you, Sammy, I have to admit I've been dreading this day.”
His eyes widened and he dropped into the chair. “What? Dreading it? Dreading my retirement?”
She covered a smile. “Don't sound so hurt, honey. It's just that I don't want you to mess up my system. You know, I've got everything organized and if you start helping out, I'll have nothing to keep me busy all day.”
Her voice fell at the end of the sentence. Sam reached for her hand.
“Really? I thought you could use the help.”
She shook her head. Tears welled in her rich brown eyes. “Since my legs got bad, I've needed things to keep me busy. To keep my mind off this rotten illness. The way you fixed the house is perfect. I can reach almost everything, now. I keep to my schedule every day. It makes me feel useful, Sam. I need that.”
He digested her words as memories of their past flashed unbidden across his mind. The diagnosis came when their children were born, over thirty years ago. Sam took Rachel to the best neurologists in the country, but as the symptoms worsened he knew before they did. Multiple sclerosis. It progressed slowly over the decades, relapsing and remitting as it ran its curious and elusive course. The exacerbations were periods of unusual exhaustion, facial and limb numbness, and weakness in the legs accompanied by frequent bouts of depression and anxiety. Six months ago, Rachel's legs gave out. She'd tried a cane for a while, but fell three times. Finally, and with much angst, she accepted the small scooter Sam purchased for her. She swapped between a lightweight wheel chair and the electric scooter, depending on the circumstance.
Sam looked into her eyes. They were still beautiful, after all these years. He leaned over and ran his rough fingertips along the soft down of her cheek.
“Okay, honey. Don't worry. I've got plenty to keep me busy outside, anyway.”
She brushed at her eyes and squeezed his hand, flashing a familiar look of affection.
“Thank you.” Her voice shook, husky with emotion. Changing the subject, she put her dishes in her lap and wheeled to the sink. “Are you working on those nasty weeds today?”
He nodded. “Uh huh. It’s slow going. And I have to mow again.”
The thought of the cool blue air called to him. He felt the pull of the garden as he fidgeted in his chair. His hands ached to be in the soil again. There was weeding, mowing, planting, mulching, and clearing to be done.
“Well, then, you'd better get out there. That lawn won't mow itself. And don’t forget, the boys are coming later.”
He had forgotten about his grandsons’ visit, but didn’t want to admit it. “I won’t.” He kissed her forehead and walked back into the sunlight, refastening the Velcro on his back brace. A simple arrangement, the stretchy straps worked like suspenders, and the wide, nylon brace rode low on his back. He repositioned it, took a deep breath, and started toward the knotweed colony.
As he headed out, a memory flashed through him—brief, but palpable. Billy and he, aged twelve and eleven, had walked barefoot on the hot pavement after a spring rain. Soft tar warmed their feet. Rain puddles sizzled and misted on the road. The boys laughed, then raced home to dinner. Steak, corn on the cob, baked potatoes, and salad. Billy's favorite.
Sam checked the date on his watch. May twenty-fourth. Billy turns sixty-one today.
The little boy who slept in the bottom bunk, who breathed hot, sweet breath on his face when they hid in the closet beneath the stairs, who offered his sticky hand during scary movies, and who mysteriously disappeared on his eleventh birthday—would be sixty-one today.
He closed his eyes and let the wind blow across his face. The breeze lifted his hair. Sam felt the cool soft touch brush his skin. He pictured his brother communicating with him from Heaven. He'd often imagined it, and was comforted by the thought.
Happy birthday, buddy.
He opened his eyes, sighed, and ambled toward the stone fire pit behind the barn. He dropped onto the old iron bench and wondered for the millionth time what had happened to his brother.
Sam reached into his pocket and fingered the green marble. It reminded him of the marbles they played with as children.
Could it have been Billy’s?
He closed his eyes again and rolled it in his hand. The smooth glass slid between his fingers, warming his hand, then grew almost too hot to touch. Surprised, Sam plucked it from his pocket and inspected it. Strong sunlight glinted on its surface, but it seemed to glow from within. He cupped his hands around it, puzzled by the intensity of the heat.
Instantly, a green flash blinded him, forcing his eyes closed. Shimmering, ghostly images danced before his mind's eye. The sound of children playing reverberated in the air. In seconds, he was transported to another realm, wrapped in a rolling cloud of green effervescent swirls.

The Disappearance of Billy Moore

Thanks for reading and let me know what you think in the comments, below!

Remember to take pleasure in the little things, and if you love to write, write like the wind!