Click here to read an excerpt or order the ebook.(Print book to be released in 2007) 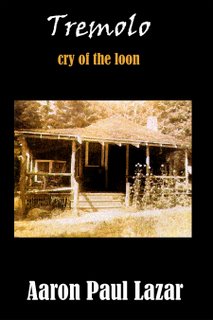 Reports of stolen religious artifacts reach the lakeside camp. New England churches have been ransacked, and missing is the church bell cast by Paul Revere, stolen from St. Stephen’s church in Boston’s North End. When Gus and his friends stumble on a scepter that may be part of the loot, they become targets. The villain turns on them, and all thoughts of a lazy summer whirl out of control.
"Beautifully written, with the perfect touch of nostalgia and suspense, the pages of this book tremble with a strong emotional appeal. As the plot steadily progresses, the climax explodes like a summer thunderstorm, clearing the air with the rush of truth. Tremolo: cry of the loon sings with the voice of love, laughter and the timeless power of friendship."Joyce Handzo, In the Library Reviews.
- Joyce Handzo, In the Library Reviews.
Posted by Aaron Paul Lazar at 3:53 PM

I absolutely loved this one. One of my personal faves from you, Aaron. :-)

Arghh! Must get to reading this!