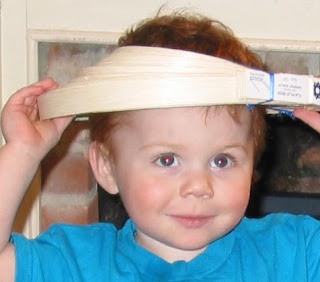 We got a lot of mileage out of that flannel sheet. Julian especially liked the peephole that was there, courtesy of our puppy trying to bury a bone in my bed the other day. Gordie decided to make the puppy into the bad guy, and then we had someone really fierce to fear. Balto lay on the floor, chewing on yet another toy that wasn’t his, a pretend circular saw that made cool noises like a real one. Each time the toy whirred, we ducked under the magic tent. I told them stories about Dorothy and the witch and the wizard, and couldn’t seem to get the scenes out of my head.

After about an hour of this, I grew weary. I’d been exhausted lately, dealing with the death of my beloved dog (that’s another story) and trying to beat two viruses in a row that slammed me in February. I hadn’t yet regained my usual boundless energy, and knew it was time to say good night.

Posted by Aaron Paul Lazar at 9:34 AM

Aaron, that is one precious post. We have no kids, so no grandkids. Your post lets me see what I'm missing. Enjoy it while you can.

Great post, Aaron...beautiful children. I, like Steve, have no children or grandchildren either, but I can understand your joy.

I felt compelled to write a comment after reading yours in Steve's post (I'm glad he has returned to the 'fold')....see...you do have another reader and commenter! ;)

Hi, Steve! Hey, thanks for stopping by. I'm glad you can get some kind of vicarious enjoyment from my life. So nice to "see" you again!

Hi, Lee! Thank you for responding to my pitiful post at Steve's last night! I'm delighted you came by to say Hi. Made me feel like it's worth it again. ;o) Thanks!

My son is only 14, so I'm not looking forward to grandchildren any time soon, but it brought back great memories of when he was little.

You're right. Our moments with little ones are precious and should be cherished.

It's so nice to hear from you again. You'll have to let me know when you update your blog next time - I love your posts.

When my eldest was 14, I thought I had years to wait for little ones. But life sometimes surprises you. Five years later, Julian was born. And you know, it's like it was meant to be. He and his little brother have given my wife and me such joy. It's hard to fathom how we survived without their smiling little faces in our lives.

Beautiful piece. I love your "seedlings."

However, I do have to disagree a little - because if one always says yes to others, then one may never have time to say yes to the little one that still lives inside each of us.

Good point. There is a need for that, as well. We need to nurture and love our inner child, too. ;o) Thanks!