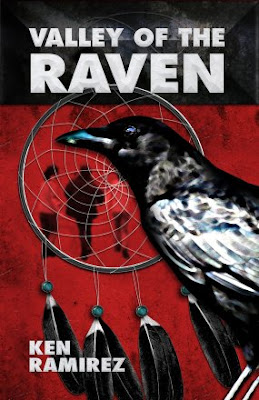 Valley of the Raven is a captivating novel set in the beautiful foothills of the Sierra Nevada Mountain range. When teenagers Ty Dettin, his younger brother Seth, and their pal Tanner White set out for a typical dirt bike ride in the California Sierra Gold Country, they are unaware of the life-altering adventure lurking around the next bend. Tooling along in the spring sunshine, Ty and Tanner follow Seth onto an overgrown trail that leads to decrepit buildings, vestiges of the California gold rush days, when the land was ravaged for the sake of monetary riches. While poking around one of the shacks, the trio discovers a map buried beneath floorboards in a tin box.

The yellowed map appears authentic, providing a detailed sketch of a gold-filled cavern, signed by “Coop.” Fueled with a desire to discover the gold, they set out to investigate.

In a strange and magical twist, the trio happens upon an elderly Native American woman, Nevar, who lives along the banks of a river in a remote and magnificent valley. She connects with them spiritually, most particularly with Ty, accompanied by her totem, the raven. Said raven, Kaji Taka, appears at all crucial points of the adventure, assisting and protecting the boys as they move closer to the awful truth of a pending scheme that threatens Six Hills and its pristine reservoir. Ty is touched by this encounter, haunted and somewhat frightened, but he cannot stop thinking about the old women and the strong urge to visit her again.

In a parallel effort to claim the gold of their ancestor, “Coop,” recently released jailbird Curtis “Junior” Cooper and his brother Carl begin an expedition to mine the gold. Assisted by fellow ex-cons, Skinny, a chain-smoking expert underwater diver who watched his abusive father drown in the pond by his home when he was a child, and Steve “Eight-Pack” Hunt, a body-builder mechanic who resembles a big Swede, Junior and Carl plan to drain a pond that hides the gold-filled cavern.

Mr. Ramirez expertly weaves yet another theme through the novel, bringing us back in history to the life of Buffalo soldier, Clay “Coop” Cooper, a strong and upstanding black man who fought bravely for the American army, and with his meager savings purchased the land that includes the valley in which Nevar appears to them. He and his wife, a lovely Lakota woman named Maka, begin a life in the rich Sierra valley, and implement a plan to purchase as much of the land as possible, donating it to the people and forbidding it to be sold privately in the future. The diverse history of the Native American tribes, the Buffalo soldiers, and their plights are beautifully told by Mr. Ramirez, a teacher himself, through scenes in a classroom where his own teaching abilities become apparent.

When the boys and their friends discover the Coopers are planning something so dastardly the entire region is threatened, they push forward with great integrity and courage, in spite of the mind-numbing roadblocks that constantly impede them. Ty is drawn to a destiny ingrained in his part-Comanche genes, and moves forward on a path of sheer lunacy and utter heroism as he endangers his own life to save the land and people of Six Hills.

Mr. Ramirez has created a lyrical world that breathes with life. The boys’ dialogue is natural and real. Their actions, fears, discussions, and reactions ring true, a testimony to the author’s acute understanding of youth.

Aside from the engaging storyline, Mr. Ramirez’s has painted enchanting descriptions of the countryside, as in this excerpt:

“As the sun crested over the surrounding granite peaks in the glorious morning scene reflected on the lake, its surface completely smooth, not a wave, not a ripple, a true mirror – Maka’s Mirror. The sky and lake together burst into a flaming golden-orange, accented with large white clouds whose fiery bellies seemed almost metallic. A small flock of Canada geese circled the lake and then, with extended webbed feet and outstretched wings, skidded across the surface of the placid mountain water, their honking amplified by the stillness of the dawn. When they finally settled on the water, the wakes of disturbance rolled through the liquid canvas, sending splinters of color and sparkling reflections in every direction.”

As the completely satisfying adventure escalates toward a pulse-pounding finish, Mr. Ramirez incorporates surprising, yet believable twists in his characters, all the while subtly sharing life lessons about responsibility, stewardship of the land, respect for people of all nationalities, and following one’s destiny. The most important lesson deals with the insight that our natural world – with its sparkling streams, wildflowers, tall pines, and unspoiled wilderness – provides the true “riches” which transcend monetary wealth.

I highly recommend Valley of the Raven to readers of all ages. It will quench a deep universal thirst for adventure and heroism. My only question is this: will Mr. Ramirez grace us with a sequel?

***
Aaron Paul Lazar is an engineer by day, but his passion lies in writing. The first book in the LeGarde Mystery series, Double Forté, is an absorbing tale of love, intrigue, and murder; “a feast for the senses that will leave you breathless.” Upstaged, the second book in the series, features a disturbed stage mother, a deviant predator, and a twisted saboteur who lurks backstage, terrorizing the drama club with deadly, psychotic games. “Lush, vibrant, and delicious.” Lazar’s latest book, Tremolo: cry of the loon, a literary coming-of-age mystery, is available through Twilight Times Books.

Lazar’s monthly columns are featured in the Futures Mystery Anthology Magazine, Voice in the Dark newsletter, and The Back Room ezine and his writing advice articles have been often published in Absolute Write. He lives in Upstate NY with his extended family. Visit his websites at http://www.legardemysteries.com/; http://www.mooremysteries.com/, and his blog: http://www.aaronlazar.blogspot.com/.

Aasron, great review. A bood I have to read.

Thanks, Steve. The book will be out in print in mid July. I'm sure Ken would be happy to sign and send you a copy if you'd like one. He's a great guy - a science teacher, devoted dad, sports coach, and writer. A wonderful fellow with a lot of talent! Let me know if you want to get in touch with him.