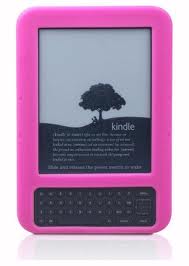 Have you ever considered listing your eBooks for free?

Some writers might react viscerally to this suggestion, horrified by the idea of giving away the product of their hard earned work. I do understand that, having put in countless hours over the past fourteen years writing my own fifteen books. I probably would have felt that way in the beginning, too, we had had the option. But over the past years I've learned that giving away freebies is a great way to invest in future sales. Especially when they're eBooks, which require a much lower cash investment.

I've purchased my own print books since Double Forte' came out in 2004, and I frequently give away 50-100 copies of each title to reviewers, folks I happen to meet who love to read, or if I'm just feeling generous throughout the course of the year. For example, yesterday I mailed a whole set of my print books to the local radio show for their annual auction, another set to a local charity who expressed interest in a possible book signing at their event next year, and one copy to a young friend of my daughter's whose mom just passed away. She's a sweet girl who's having a very tough time dealing with her awful loss. She also has no family left, and we're trying to bring her into the fold. (she came to my birthday party this week.)

I usually find that when I've given away one book, almost everyone comes back, wanting the rest in the series. So, I've seen this "invest in your future by giving away samples" theory work on a small scale.

Over the past year, as I've transitioned from my prior distrust/dislike of eBooks to becoming their most enthusiastic fan, I've learned a lot. My wife and I have fallen in love with the Kindle, and I read books on my iPhone and laptop all the time now.

I've read about other authors who have made substantial sales by giving away or selling their eBooks for very cheap prices. (J.A. Konrath, for example. He's been very generous to share his story with writers, and I've learned a great deal by reading his accounts.)

The idea behind the strategy is this: Who's going to buy the book of a complete stranger for $16.95, unless they've met you (online or otherwise) or have somehow bumped into your book? Why would they necessarily take a chance on you? Or even have a chance to hear about you? But -  if they can get your book for free, there is absolutely no risk on their part. If they do like the book, they'll frequently come back for more, especially if you're writing a series.

There are a gajillion services out there now that troll places like Amazon looking for new "free" eBook deals. They send daily digests to enormous distributions. So, if you can get your book up there on that free list, chances are you'll get a ton of folks downloading your work.

We recently had a chance to experiment with this during Read an eBook week. My publisher, Lida Quillen, offered a few eBooks for free on her website, Twilight Times Books, in honor of the special week. She chose to offer Tremolo: cry of the loon from my of books. I'd been discussing this with her for about six months, hoping to find a good chance to experiment with the concept.

Apparently, an Amazon algorithm picked up on the freebies on our Twilight Times Books website, and they listed the books for free on Amazon. Around March 10th, emailers started sending out updates to their subscribers. All three of the TTB books started climbing up the charts, until most were in the top ten for days.

This continued. Tremolo bounced around from #1 to #2 for about five days. I took screen shots. ;o) 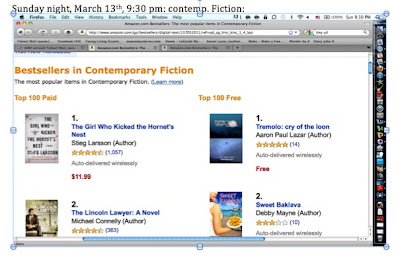 This is a shot from the Amazon Kindle store, their bestsellers list in contemporary fiction. Around March 15th, Amazon changed the price on our free book to $2.75. We don't know why this happened, but it did. Suddenly, we started selling Tremolo, both eBooks and print (but mostly eBooks). We knew folks were were downloading tons for free before that, but for some reason, they started buying them. I believe it's because the book remained on the free list for several days.
Now get this. Publishers only receive 30% of the $2.75 price from Amazon, and I get half of that, so we didn't make tons of money like one might have expected. (if you list for $2.99 or over you get 70% of the price). Anyway, I've been charting it. We switched from $2.75 to $2.99 recently, and sales are still going, but slowing down a bit. (the bars are cumulative sales, and the line is sales rank on contemporary fiction, see the scale on the right for this series.) 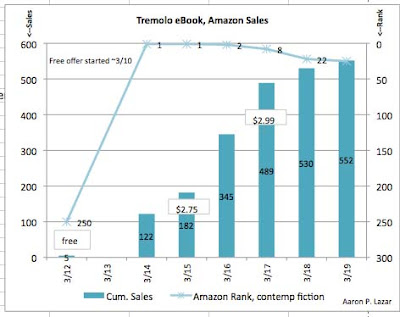 I can't wait to do another trial of this. Of course, both my publisher and I did a whole week's worth of blogging and mass correspondence to let everyone we could think of take advantage of the freebie. We worked very hard behind the scenes. Next, we're thinking of offering Mazurka for free the month leading up to FireSong's release in July. I'm excited about the possibilities, and hoping it works out the same way.
(Has anyone else had experience with this? I'd love to hear from publishers who list their books for free with Amazon, because so far we haven't found an option to purposefully put our books up on Amazon for less than 99 cents. Any info would be appreciated!)
Well, it's time to get back to writing. Hope you all have a great Sunday, and remember... take pleasure in the simple things...
- Aaron