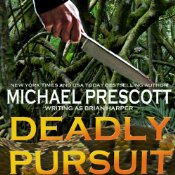 
Jack Dance is the cleverest, nastiest, and most accomplished sociopath ever to grace the pages of a thriller. With no conscience and a devil-may-care attitude, this smiling, tune-humming, horribly handsome serial killer will make you shudder. His cavalier attitude when engaged in murder, his complete and utter lack of humanity, and the pairing of these attributes with the most cunning criminal mind of the century will linger in your mind long after you’ve finished the book.

Jack had a bad experience when he was eleven. It had something to do with a blue-eyed blond named Meredith. And after stewing in hot rage for many years, he finally takes action. Her murder—his first—whets his appetite for what is to becomes a ritualistic re-killing of Meredith, over and over again.

Aside from being a superb writer—I say this with complete honesty and zero exaggeration—Mr. Prescott is a talented plot twister who maintains tension and never, ever lets it slacken. Once you’ve read (or listened) to his books such at Stealing Faces, Blind Pursuit, or Mortal Pursuit, you’ll learn that you’d best store up some extra adrenaline for the guaranteed ride to come. Deadly Pursuit is relentless in its suspense, and your favorite protagonist will be sure to partake of many successions of satisfying chase scenes with the villain. I’ve said this before, and I’ll say it again: when it comes to writing thrillers, Mr. Prescott leads the pack.

Steve and Kirstie Gardner head for a vacation on Pelican Key, the place of Steve’s childhood summer vacations, where he and his pal Jack Dance explored and clambered over the ruins of the old lime plantation. Now the house has been restored, and it beckons to Stephen with an inexplicable urgency. He needs to be there. He craves the connection to his youth. And he worries that maybe—just maybe—secrets from his past might follow.

The problem arises when Jack Dance happens to seek refuge on the same island when the feds begin to link him to the murders of the now infamous “Mister Twister.” When Jack bumps into Kirstie on the beach, his thirst for blood surges, because as luck would have it, she looks a lot like Meredith.

I won’t spoil the plot by telling you more. Just rest assured that the ride is torturous and deliciously scary.

This book is much more than a thriller—it’s also a story that transports you from your armchair to a tropical island. I love novels with a sumptuous “sense of place.” Deadly Pursuit propels the reader smack dab in the sultry humidity of the Florida Keys. I’ve never been there, but felt thoroughly connected thanks to Mr. Prescott’s descriptions of the lush flowers, trees, wildlife and ecosystem. I am certain he must have frequented the location in person, so beautifully drawn were the scenes.

I happened to experience this book in audio book format. The narrator, Christopher Burns, has an uncanny knack for voices, especially for the carefree, jaunty inner voice of a serial killer. It “creeped me out” as my kids would say, to listen to this sociopath in such an intimate fashion. Well done, Mr. Prescott and Mr. Burns!