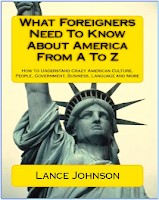 Mr. Lance Johnson has written a book that will help so many people that I have decided to give him a bit of help in exposure by featuring his book here today on this blog. It's not a mystery. It's not a suspense. No, it's actually non-fiction, which I hardly ever read, I'm ashamed to say.

But Lance's book is geared toward aiding new arrivals to our country by spelling out all that is America. I think it's great. I hope you will too, and perhaps you can keep this in mind the next time you meet a new immigrant to The United States of America. 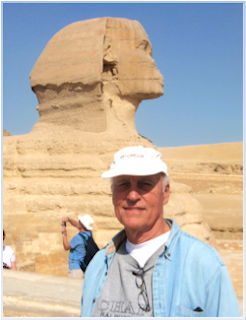 Having taught overseas and traveled in 81 countries, I was always amazed at the nonstop questions people had about all things America. Crazy America, as some called it. Our language, government, people, literature, films, food, dress. Our behavior. Even our negative image on the world stage. At home, I watched my foreign heritage friends struggle to start a new life—get jobs, open businesses, enter schools, make friends.

After years of these exchanges I searched for a book I could recommend to them that condensed and simplified what America is all about. Aside from the multitude of stuffy textbooks it would take to cover this cosmic sized subject, there wasn’t one. So I began thinking about writing one, not sure I wanted to be slayed by this Herculean monster. It stewed on my back burner for several years.

Then, on a flight to Beijing in 2001, I sat next to an American executive in charge of overseas operations for a major U.S. corporation. He lamented the struggle he had teaching American business concepts to his foreign managers. I mentioned my abeyant book idea. His face lit up. He said such a book would make a valuable training aid for his foreign managers and executives. “Good hard facts,” he said, “culture, the big picture, the details. Because of cultural differences they just don’t get the full picture and tend to revert back to local customs. As a business we need to hit on all cylinders. In this competitive world we can’t afford to backslide.”

That was the final jostle I needed. I returned home and the next day began to write What Asians Need To Know About America From A to Z. It would take two years to complete. Halfway through the research and writing process, I signed a contract with a major Chinese publisher for the rights in China thanks to the efforts of an agent there, the only one who had the same vision I had. I finally had the confirmation I wanted: What I was doing was indeed important.

Next step: Endorsements. My attitude is if you don’t try you’ll never know. I sent a two-page overview of my upcoming book along with the first pages of the 26 chapters to the American ambassador in China and the China ambassador in the U.S. I was shocked…it was easier than I thought it would be. They wrote endorsements! So did journalists, editors, educators and scholars around the world.

After its publication I learned that marketing books in China is just as difficult as in the U.S., but with a few cultural differences that make it even harder. Book signings, mailings, and other marketing attempts to spur sales are alien, even for a major publishing house like mine.

Fast forward to 2009 when I set sail to expand my book to include all foreigners, not just Asians. I tweaked the title to What Foreigners Need To Know About America From A To Z: How to understand crazy American culture, people, government, business, language and more.
Three years later it was published at 614 pages. Would its inch-and-a-half thick size scare readers away? I had three choices: 1) drop the two hundred-plus pictures to slim it down, 2) use a glasses-needed smaller font size, or 3) come up with four smaller books that correspond to the four major sections in the big guy: America’s Heritage, America’s Culture, America’s Business, and America’s Language. I chose the latter to allow the readers to target their own needs or interests.

To make the book relevant to foreign readers, I knew I had to use lots of comparisons— how we do things in the U.S. and how they vary from country to country. So in the introduction I wrote about Budapest, Hungary, where I was shocked I had to pay for a packet of McDonald’s ketchup—something that’s free in the U.S. And how flashing the soles of your feet in Thailand is a big no-no versus the bare foot mentality in the U.S. And the confusing times in Bulgaria when they nodded up and down to signify “no” and left to right for “yes,” the exact opposite of what we do. And in India where drivers ignored stop signs and traffic lights, but you’d better not do that in the U.S. In other words, do not expect things to be done here as they are back home, and be alert to making needed cultural changes that I discuss in my A to Z book.

I also wrote, “With all of our cultural differences though, you’ll be surprised to learn how much our countries—and we as human beings—have in common on this third rock from the sun called Earth. After all, the song played at our Disneyland parks around the world is “It’s A Small World After All.” Thanks for coming along on this journey with me. Thank you for allowing me to share my America with you. And thanks to all of you who shared your country with me.”

What did I learn from my twelve-year odyssey?

·      First and foremost, don’t give up on something you truly believe in, as I almost did when scores of agents and publishers said they had never seen a book like this, so it probably wasn’t worth pursuing. There will always be naysayers for everything we want to attempt in life…and that includes agents and publishers.

·      Get a good editor who is forthright, honest and not afraid to slash and burn here and there. However, keep your eye on your North Star. My guiding light proved to be the right direction on several issues.

·      Keep rewriting until you have the tone and flow you know is right for your book. Know who your reader will be. In my case it was foreigners who likely read English as a second language, thus my language had to be simple. I also scattered light-hearted humor and personal notes to avoid a textbook tone.

·      Don’t be in a hurry to see it printed because you only have one chance to make a good first impression. And, yes, once printed you’ll hit your forehead with your open palm when you still find typos and dumb errors.

·      And finally, the big shocker is the marketing effort that must follow the publication. As most authors say, this is the hard part, not the writing of the book. I found the books I needed in the Frugal Book Series (http://howtodoitfrugally.com/) most helpful in this department.


Good luck with your writing and keep the faith!

Lance Johnson is a former CEO and management consultant who has traveled in 49 of the 50 states and continues exploring the difficulties foreigners face understanding American ways and language, and how that affects their success in dealing with Americans. He consults, teaches, and conducts seminars about the subjects in this book. He has an Ivy League graduate business degree and has studied at Oxford University in England. He is also an actor on the stage and in film, commercials and on TV, including a lead American role in a 28-part TV series in China.

The book and the author’s website is http://www.americaatoz.com/. The book is sold worldwide on amazon.com (simply do a search there on “what foreigners need to know” or “lance johnson”). It can also be found or ordered in bookstores, including famous Vroman’s in Pasadena, California, that is celebrating its 118th year in business and where he will have an upcoming book signing.

I'm glad you departed from your usual, Aaron--both the reading the blogging of it. The spice of life and all that. Just so you know, your link will run in my newsletter and I just shouted it out to my author-followers about how clever you are.

By the way, I'm passionate about this book, too. I can see how--if read widely enough--it could change the polarized climate of America.

Carolyn, it is my pleasure to feature Lance here today. I know that his book will do lots of good for our newest citizens and visitors - I'm grateful that someone like Lance is out there to help them!! God Bless America. ;o)

please could you visit my blog and leave a comment, its about writing, i would really appreciate it. your blog is very intesting by the way!