Review for CRESCENDO by Deborah Ledford 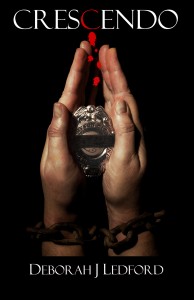 Crescendo, book three in the Steven Hawk/Inola Walela psychological suspense thriller series, follows in the fast-paced and mesmerizing tradition of Staccato and Snare, the first and second books in the series.

I’m not going to rehash the plot here, because there are already a plethora of summaries in reviews previously posted. What I do enjoy writing about, however, is the reaction I have to novels, and how the characters or plot affected me personally. I know, it’s a bit narcissistic, but those are the types of reviews I like to read, not just plot rehashes. ;o)

Since I read the first book in the series, Staccato, I’ve loved the character Inola, a Native American cop who’s constantly having to prove herself to her police department colleagues in the relatively backwoods town of the Bryson City, North Carolina. In spite of her stubborn nature, her inability to communicate with those she truly loves (Steven and her grandmother, Elisi), and her insistence on going out on her own despite obvious dangers that threaten – you can’t help but love her. Tough, focused, and smart, she’s everything you’d want in a heroine.

I particularly enjoyed her vulnerability in this book re. the evil villain’s charms. When she is told her bullet most likely killed her best friend and partner, Cody, she is understandably traumatized. She’s removed from her job, believes she is responsible for Cody’s death, and is obsessed over the mention of a missing child at the scene of the accident that opens the story. These three items weaken her confidence and resolve, and she’s inexplicably drawn to a fellow sympathetic listener, Preston, who happens to be a delicious villain. Preston—a wonderful actor—charms her into his arms. Problem is, Inola’s currently living with and involved in a relationship with the rugged black Sheriff, Steven Hawk.

There were many memorable scenes, including Inola’s visit to the villain’s hotel room, the shivery cold chase scenes through the woods, and the amusing scenes with the IT jailbird who is released to help out the cops. My favorites, however, were those showcasing Inola’s grandmother Elisi and the young abandoned boy they rescue from a hotel room. Her loving attention to this boy broke my heart, and I felt instantly moved. Although it seems Elisi didn’t connect with Inola when she was delivered to her to be raised, she apparently has grown and changed over time, and has a great deal of love to share.

I have recently learned that Ms. Ledford is planning a fourth book in the series – hurray!

Here's a bit about the author, Deborah Ledford:

Deborah J Ledford’s latest novel, CRESCENDO, is book three of the Steven Hawk/Inola Walela thriller series from Second Wind Publishing. Other novels include: SNARE—The Hillerman Sky Award Finalist and the NM-AZ Book Awards Finalist, and the classical music-themedSTACCATO. Part Eastern Band Cherokee, she spent her summers growing up in the Great Smoky Mountains western North Carolina where her novels and quite a few of her literary and short stories are set.

Three-time nominee for the Pushcart Prize, Deborah’s award-winning short stories appear in numerous print publications as well as literary and mystery anthologies. She is also a professional content editor and is most proud to be Lead Editor of three award-winning Sisters in Crime Desert Sleuths Chapter (AZ) anthologies.

She lives in Scottsdale, AZ, is pack leader of two awesome Aussie Shepherd boys and one extremely patient husband. Currently working on a new suspense thriller series, the screenplay for SNARE, and launching audiobook versions of the Steven Hawk/Inola Walela thriller trilogy which will benefit the advancement of Native American language and culture.

Aaron Paul Lazar writes to soothe his soul. An award-winning, bestselling Kindle author of three addictive mystery series, Aaron enjoys the Genesee Valley countryside in upstate New York, where his characters embrace life, play with their dogs and grandkids, grow sumptuous gardens, and chase bad guys. Visit his website at http://www.lazarbooks.com and watch for his upcoming Twilight Times Books releases DON’T LET THE WIND CATCH YOU (2013), SANCTUARY (2014), and VIRTUOSO (2014).
Posted by Aaron Paul Lazar at 7:22 AM