The Story Behind The Curse Giver by Dora Machado

As I mentioned Friday, I am going to feature several articles by the very talented Dora Machado, whose new Twilight Times Book, The Curse Giver, is being released today. Here's the second piece. 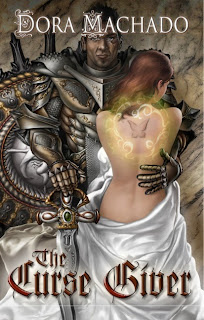 If the story intrigues you, we encourage you to download it on Wednesday, the 17th, as part of my support for Ms. Machado! Let's blast this book!

Please help me welcome her back to the blog today! Welcome, back Dora! 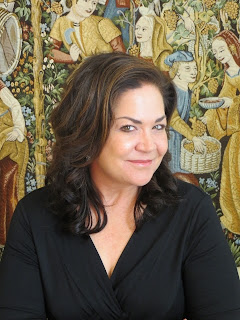 The Story Behind The Curse Giver

The Curse Giver was an accident, a professional indiscretion, if you will, conceived during one of my little escapades, and born out of unchecked passion. Yep, I might as well come clean. Even the most disciplined writer can be unfaithful to her projects, and no matter how thoroughly taken one is with one's current novel, the danger for a tangent is always there when venturing into the world of research.

So there I was, researching one book, working hard to finalize the Stonewiser series, when I came across this insidious concept that kept disrupting my train of thought.

Now, to understand the story behind The Curse Giver, you must understand me and my writing habits. I'm not easily distracted. When I'm writing a novel, my brain goes into hyper mode. I'm disciplined, motivated and focused to the point of obsession, which is why The Curse Giver was such a surprise to me.

The subject of curses has always fascinated me, not only because curses are such a vital part of magic and fantasy, but also because they are so prevalent to the human experience. To be honest, I had always been intrigued by the subject, but didn't delve into it, until one very late night—or was it very early morning?—when the wind rattled my window as a coastal storm blew in from the sea.

The clay tablets that popped up on my screen dated from 600 BC and were part of the library of Nineveh, also known as the library of Ashurbanipal, the oldest surviving library of cuneiform tablets. This is the same collection that gave us the famous Gilgamesh epic. Visually, the tablets weren't much to look at, chicken scratches on clay. But the translated words had an impact on me.

"May all these [gods] curse him with a curse that cannot be relieved, terrible and merciless, as long as he lives, may they let his name, his seed, be carried off from the land, may they put his flesh in a dog’s mouth.”

I know, hardly an inspiration for most. Me? I immediately thought of the man who had been thus cursed, of the pain and hardship such curse would bring upon him and his people, of the character that eventually became Bren, Lord of Laonia in The Curse Giver.

From there on, the curses flowed before my eyes, mysterious ones from ancient civilizations in Egypt, India and the Far East; thin lead tablets dating from the Greco-Roman world, judicial prayers, secret invocations, warnings and love spells that streamed into my consciousness. I knew I should get back to my original research, and yet I was smitten with the subject.

There were curses quoted from the Bible, medieval curses, real and forgeries, Viking, Celtic, Germanic, Visigoth, Mayan, Incan, Hopi, you name it. There were ancient curses but also modern curses, some associated with Santeria, voodoo and the 21 Divisions, religions that are common in the Dominican Republic where I grew up.

Who would cast these curses and why? What kind of creature could be capable of such powers? What would motivate a person to curse another one? As I explored these questions, a character profile began to emerge in my mind, someone whose understanding of good and evil was very different from my own.

Sorting through the research, I could see that some curses had practical applications to make sure people did what they were told. They served as alternate forms of law enforcement in lawless societies. Some were obviously malicious. They were meant to frighten and intimidate. Some were more like venting or wishful thinking. It turns out that mankind has been casting curses since the beginning of time and will probably continue for as long as we have the imagination and faith to do so.

A new question formed in my mind. Once cursed, what could a person do to defend himself? A third character emerged from this question, Lusielle, a common remedy mixer, a healer of hearts and bodies, someone who didn't realize the scope of her own power until it began to transform her life.

Eventually, I wrestled myself out of the trance. I had a book to write and a series to complete. I had deadlines. But my little detour had made an impact. The concepts were at work in my subconscious, coalescing into a new novel, fashioning these powerful characters who demanded their own story. My encounter with curses had been but a slight detour from my research plan, a tiny deviation, an indiscretion to my schedule, but the seed had been planted and The Curse Giver thrived, even if I didn't know it yet.

Dora Machado is the award-winning author of the epic fantasy Stonewiser series and her newest novel, The Curse Giver, available from Twilight Times Books, July 2013. She grew up in the Dominican Republic, where she developed a fascination for writing and a taste for Merengue. After a lifetime of straddling such compelling but different worlds, fantasy is a natural fit to her stories. She lives in Florida with her husband and three very opinionated cats. To learn more about Dora Machado and her novels, visit her website at www.doramachado.com or contact her at Dora@doramachado.com.

Got me fascinated. Especially the beginning here....about how the story kept nagging her. The Regency/paranormal story I just finished writing is like that...the narrator is being mentally nagged by a entity that would not leave her alone and demanded time to write.
Can't wait to read this book. Thanks for posting